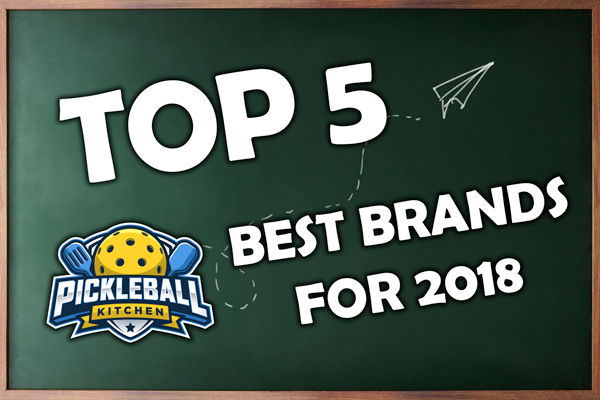 The wonderful world of pickleball is chock-full of passionate players looking to up their game to the highest levels possible. Most seasoned players know what’s what in the pickleball world and thus knows what pickleball brands to watch.

But if you’re a new player it can be hard to know which brands are the best. That’s why I’m here to give you a head start in 2018 by teaching you about the best names in the business.

The companies that I’ve looked at don’t just make pickleball paddles. I include everything from retail stores to paddle manufacturers. Also, please remember that just because I don’t have a brand listed, that doesn’t mean that they are inferior quality in some way. You don’t have to buy gear from my #1 pick just because I have it listed. Use whatever is best for you!

Pickleball Central is the most popular online retailer for pickleball equipment. They sell everything including paddles, balls, nets, apparel, grips, pickleball sets and much more. Their store is easy to navigate and even more straightforward to purchase the things you need. They offer multiple shipping rates and have excellent customer support. I’ve personally worked with them on a few issues I’ve had, and they handled everything to my liking.

Pickleball Central isn’t just an online store. The company also makes paddles, nets and more. The paddles aren’t the highest quality on the market (besides their Rally line), but they don’t have to be! One example is their Rally Tyro. This paddle is made for beginners and is made as cheaply as possible. It’s a great starter paddle.

Considering the kind of influence and reach Pickleball Central has, many beginner players who are surfing the web for pickleball advice can quickly get a hold of one of these paddles. That makes it great for the player and great for the game.

But the main reason why I’m excited about Pickleball Central is that they have so many options open to them regarding their website. What if they started offering yearly subscriptions to try out a paddle every month for a year? Or what if they began offering virtual coaching lessons? The sky’s the limit.

You’ll want to keep an eye on Pickleball Central. Personally, I’m excited to see what they do in the future.

I didn’t want to include any hybrid tennis/pickleball companies on this list, but I decided to make an exception with Gamma. Gamma is a premium manufacturer of pickleball equipment including paddles, grips and more. They have a host of paddles on the market including the Fusion, Atomic, Phaser, Voltage, Micron, and Neutron. They also recently released (November 2017) a new line of paddles. This lineup includes the Razor, Mirage and the Twister.

I have personally played with the Mirage, and it’s a step up in performance and quality. This new batch of paddle releases from Gamma signals to me that they’re not done with producing paddles! There’s more to look forward to in those terms.

But the best part about Gamma are the grips they make. Gamma has made a considerable name for itself just by producing the best grips in the game. In fact, over 90% of the grips used in pickleball are made by Gamma.

What’s even better is that there are so many different types of grips they offer. You can easily find what’s best for you.

Most, if not all of Gamma’s grips are perforated. This means that the sweat from your hand can be quickly be absorbed by the perforations instead of smearing all over the handle. The last thing you want is your sweaty paddle to fling across the court because it slipped out of your hand.

They also have grips that are ribbed and stitched. These are great in case you need a bit more traction in your grip. Most paddles that use Gamma grips are using the ribbed versions.

They also have excellent overgrips. Personally, I love overgrips. They’re cheap, easy to apply and are very tacky. If you ever lose the tackiness in your grip, an overgrip will work wonders. Gamma has plenty to choose from and in multiple colors!

Gamma isn’t done making grips though. Their newest grip is impressive and appears on the new line I mentioned above. The new grip is simply called the Honeycomb cushion grip. It differs from the ribbed grip in that instead of the material sticking out; it sinks inward. 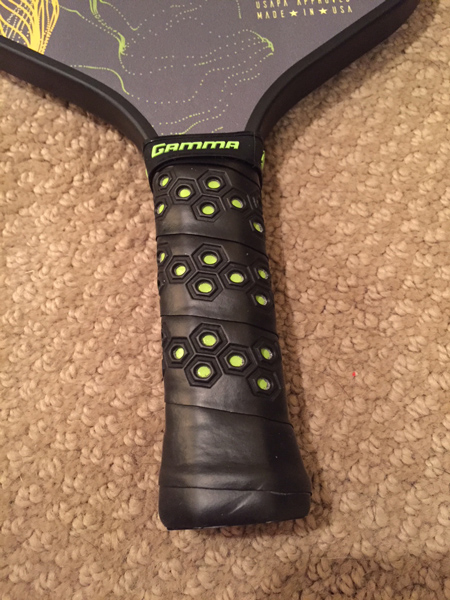 The honeycomb pattern is something that you often see in pickleball. It’s how the core materials of paddles are made after all. Gamma has decided to incorporate the design of the honeycomb pattern into a new grip. The traction and tackiness on the grip are incredible, and it stays dry even with intense play. This is the most unique grip they’ve ever made.

I’m excited to see what Gamma makes in the future. Gamma will most likely still be the best grip manufacturer in pickleball throughout 2018. So if you need any grips, you know where to go.

Onix Pickleball has been around since 2005 and has plenty of experience under their belt. They are a premium paddle and ball manufacturer that makes great paddles and pickleballs.

The interesting thing about Onix is that they have a ton of paddles to try. All are uniquely different than the other and have some fascinating visual designs and branding.

They’ve also had a paddle called the Onix Z5 that’s done exceptionally well in the past. This paddle is immensely popular because it sells at well-known sporting retail stores, but also because it gives you an incredibly tactile and “attack” feeling. It’s also a great power paddle.

Regarding new paddles, you can check out the Voyager Pro. It’s the newest in their line and features all of the materials that we know and love pickleball.

But it’s not just pickleball paddles that Onix churns out of its warehouses. They also make great pickleballs. Their newest release, the PURE2, has been creating quite a buzz recently.

Onix is a great option for players who are getting into pickleball but don’t want to spend too much money. Their paddles are high quality enough, but without breaking your wallet in the process.

You can’t go to a single pickleball location without seeing a glorious creation from Paddletek. Known for being some of the most durable paddles on the market, Paddletek is also well known for being one of the greatest in the industry.

According to their website, Paddletek got started when a man by the name of Cody had a hunch that he could create a much more durable paddle for himself and players around him. With the help of his brother, Curtis, a business was created, and now Paddletek is a fully fledged paddle manufacturer.

The paddles they make are outstanding. There are very few manufacturers who can compete on their level. I have personally tried many of their paddles if not all of them. They always meet the standard of quality that you would expect from them.

The visual designs on the paddles aren’t terrific though. Most of the times the designs are uninspired and seem random at best. But to some, this can be a good thing. One can assume that spending less time on visual design means that you’re spending more on engineering design. I think that’s a good argument to make. We’ll see how Paddletek develops their visuals as we progress through 2018.

Concerning paddles, the Paddletek Tempest Wave is one paddle worth mentioning. In my view, this is the best paddle on the market. It has an enormous, borderline juicy sweet spot. Out of all the paddles I’ve tried in the past, the Tempest Wave has the best sweet spot I’ve ever felt. The polymer core and graphite face give you the control and power you want without sacrificing control over the ball.

But what’s exciting is that the Tempest Wave sets a challenging rung to climb towards. How will they ever be able to beat it? That’s what I’m looking forward. Also, with Selkirk making considerable strides in the paddle space, they’ve got some competition that could amp up their innovation.

I recommend the Tempest Wave, the Element, and the Phoenix LTE if you’re looking to get a Paddletek paddle.

Out of all the brands that seem to be the most turbocharged, Selkirk is leading the pack. They are a premium manufacturer of pickleball equipment focusing almost exclusively on paddles. And believe me, that exclusivity shows.

Selkirk Sport is a family-owned company in northern Idaho. According to their website, the company is named after the Selkirk mountain range which is viewable right outside their office. How’s that for a workspace?

No matter what paddle you purchase from Selkirk, you can expect quality from every angle. Their paddles are made entirely in the USA and use the best materials available.

But one unique aspect of Selkirk is how they use patent-pending, proprietary materials. This isn’t marketing language magic. You can tell that the material is different just from the sound of hitting the ball. It also shows in performance. There is always a significant difference when you compare a Selkirk paddle with another brand. It’s all about the technology.

An example of this is the Selkirk AMPED paddle line. I just reviewed this paddle recently and loved it. This is a polymer core paddle that uses Selkirk’s new X5 polymer technology. The paddle is thick, but still relatively lightweight. It also features a fiberglass face which gives you tons of power and spin.

There are other great paddles in their lineup as well including the 30p XL, 300A+, Pro S1G and even a bare-bones cheap paddle called The Club.

I’m comfortable saying that Selkirk is the best pickleball manufacturer in the world and will probably continue to be throughout 2018. They set a high bar that is going to make other manufacturers rev their engines. The more competition, the better paddles we get as players!

When it comes to how the paddles are designed visually, Selkirk shows you how it’s done. I have a long history of graphic design, and I can tell you that Selkirk is easily the most visually discerning manufacturer in pickleball. It’s easy to tell that they put a tremendous amount of visual work into their brand. Most pickleball players don’t care much about paddle art, but some do. If that’s you, then Selkirk is right up your alley.

So there you have it, the best pickleball brands to look forward to in 2018. If you’re looking to maximize your pickleball game and play the best you can, then sticking with these brands will give you the highest chance of success. Again, like I said in the introduction, feel free to use any brand you want. It’s entirely up to you!

Have you used any of the companies above? What do you think? Tell me all about it in the comments below!