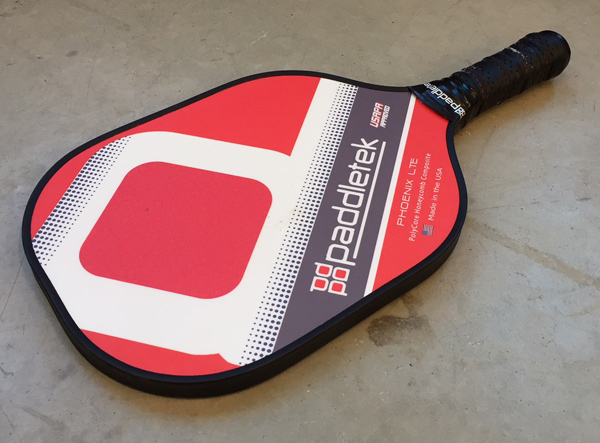 I love trying out different paddles. It’s one of the things about pickleball that excites me the most. I was browsing the internet a few months ago looking for cheap paddles when I stumbled on the Paddletek Phoenix LTE. I had played with a different paddle called the Phoenix Pro and enjoyed playing with it a few times, but I had never heard of this version. It was listed at a relatively inexpensive price, so I bought it immediately.

The only reason why I bought it was so that I could review it for you, dear reader. But I ended up loving it. I have been using it for a few months now and will be reviewing it for you today.

Here’s a general take on the paddle if you came for a quick answer. The Paddletek Phoenix LTE is a great, inexpensive paddle for beginners, older players or people who want a lightweight, yet responsive paddle. This paddle is also a great option for transitioning ping pong players, but don’t expect to get a lot of power or spin out of this one. Instead, expect this paddle to play exceptionally well at the kitchen as it will give you increased ball placement and touch. You can read more about it on Amazon here.

This paddle is fun to talk about so let’s get into the construction details!

The Paddletek Phoenix LTE is a polymer core, composite faced paddle that is lightweight and relatively inexpensive. The Phoenix LTE is the ligher version of the Phoenix Pro, also made by Paddletek. What’s interesting about the LTE (which I’m assuming stands for “lite”), is that it’s a full 1 oz lighter than the Pheonix Pro.

A 1 oz difference between two paddles will give you a massive change of performance. We’ll talk more about weight and weight balance later because it’s a huge part of the discussion in this article.

One interesting feature of this paddle is the composite face. Composite is just a fancy term for multiple things that come together to make one thing. Since composite faces are made from different types of materials, they each have to be judged individually, instead of as a whole similar to graphite or fiberglass.

The opaque composite face of this paddle feels slightly rough, but also uniform. It doesn’t feel “sandy” like a graphite face but doesn’t have a grain direction like fiberglass faces either.

Even as an advanced, strong player, I love the face of this paddle. It also complements very well with the polymer core. You can read more about paddle cores in another article, but in general polymer cores give you tons of ball control while also maintaining power.

This paddle isn’t too loud either. The combination of the core, which is known for being quieter, and the composite face makes for a noise ordinance friendly paddle.

The handle of the Phoenix LTE is standard sized. With a length of 4 ½” and a circumference of 4 ¼”, this paddle will fit most people’s hands easily. If you’re a woman, your hands will fit very comfortably. If you’re a man, especially a large man, you may have a tough time with this paddle. I’m a man, but my hands are pretty small. It’s good enough for me. But this is nothing that a bit of overgrip can’t fix. Apply some and you’ll be good to go.

On to the most exciting part of the review!

The great thing about the Paddletek Phoenix LTE is that there’s nothing too special about it. I know that may seem like a downside, but it’s really not. Similar to the Tempest Wave, the Phoenix LTE does exactly what it sets out to do.

It’s absolutely true that the Phoenix LTE is a lightweight paddle that favors older players or people with arm weaknesses. But strong players can use this paddle as well. Let me explain.

Imagine, if you will, holding a common household hammer. Where’s all of the weight? In the head, of course! To put it in physics terms, the center of gravity is located in the head of the hammer. That’s where all the weight, and thus power, is! That’s why we make hammer handles long so that we get more power at the end of the handle!

Pickleball paddles work the same way, but more subtle. Don’t get me wrong, having the properly weighted paddle for you is extremely important, but so is figuring out the balance of that weight. The question you have to ask is, where is most of the weight actually located? Just look for the center of gravity by doing this: 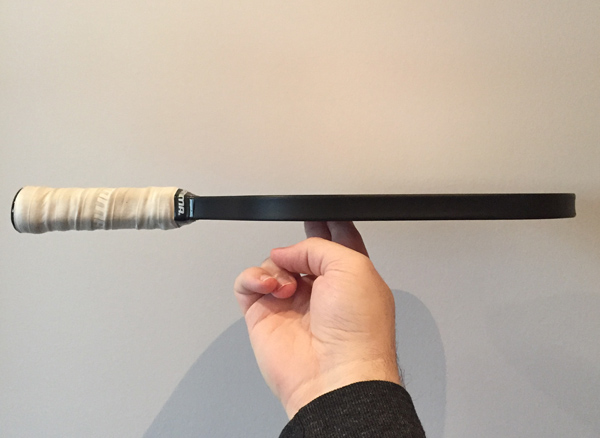 Balance the paddle on two fingers. Where is the center of gravity in your paddle? In the Phoenix LTE, it’s further away from the handle than most paddles I use. This means more weight towards the end of the paddle, which translates to power. Just think about the hammer analogy when you’re trying to figure this out. Let me know in the comments below if none of this makes sense.

Paddletek has made a lightweight paddle, that still has power because they’ve figured out a way to put more weight away from the handle, instead of towards the handle.

For context, I’m a 31-year-old man who is strong and fit. I’m not saying this to flex my non-existent biceps, but to explain that even as a strong guy, this lightweight paddle was still useable. The reason is that the weight balance of the paddle is suited for a control and dinking game as much as a power game.

But what’s important for you to understand about this paddle is that even though it doesn’t feel like a feather when you swing it, it still feels like a feather in general. If you’re not a fan of lightweight paddles, regardless of the weight balance, then you’re not going to like this paddle. I would look into either the Phoenix Pro or the Tempest Wave. If you want a heavier paddle with tons of power, check out the Selkirk 30p XL Enrique Ruiz edition.

Who is this paddle for?

The Paddletek Phoenix LTE is mainly designed for people who want a lightweight paddle. Older people fall into this category as well as people with arm or wrist limitations.

My 65-year-old mother uses the old version of the Phoenix Pro which is very similar to the Phoenix LTE. She’s been using it for almost 2 years and has never changed. My mom has some decent power, but not a lot. She relies on shot placement and dinking. This paddle is perfect for people like her.

But like I said, it can still be great for power players who want a quick and responsive paddle the snap shots down the sideline and things like that. Which leads me to my next group of players who would like this paddle.

I used to play a ton of ping-pong in college.

Probably too much. Like, we’re talking class-skipping amounts of ping pong.

Anyway, the Phoenix LTE reminds me of my ping pong days of old. I love the feeling of a solid backhand when playing ping pong. This paddle gives me that same feeling.

If you’re a former ping-pong player looking to get into pickleball, then this could be a great option for you. The lightweight action, but solid feel allows you to swing this paddle like it’s apart of your hand. It’s an amazing feeling. You really do feel like you’re standing on a ping pong table instead of a pickleball court.

As I talk about in my article about the best beginner paddles, the Phoenix LTE is a great paddle for beginners, especially seniors. This paddle doesn’t have any tricks up its sleeve. It’s simple and will be a great tool for beginners to learn from.

Another reason why this paddle is great for beginners is the price. You can check out the price here, but you can also check for used versions around the internet.

Paddletek is one of the best pickleball paddle manufacturers in the world. They make some of the highest quality paddles, and the Phoenix LTE is no different. I’ve always been attracted to Paddletek because of the brand name recognition, but I was genuinely surprised at how much I loved the Phoenix LTE. I’ve played at least 50 games with it and I can attest that it’s good one.

I get such an enormous amount of control and touch with this paddle. It is absolutely brutal at the net. I feel in control over the pace of the ball while dinking, especially cross-court dinking. It feels solid and consistent. I love getting into a cross-court dinking battle with someone because I can last so long with this paddle. Eventually, they’re going to pop it up too high and when they do I can capitalize. I utilize the lightweight nature of the paddle to do a forehand or backhand ping-pong style wrist shot and the point is over before they know it.

Admittedly I have grown out of the paddle due to it being too lightweight for me, but the fact that it took a few months to do so is a testament to how great this paddle is. I recommend the paddle to most people unless you don’t like lightweight paddles. Just in case you’re curious, I’m upgrading to the Tempest Wave after this one.

The paddle is well constructed, durable and will last you a long time as long as you take care of it. You can read more about the paddle here on Amazon. Have you ever used this paddle before? What has your experience been? Let me know in the comments below!