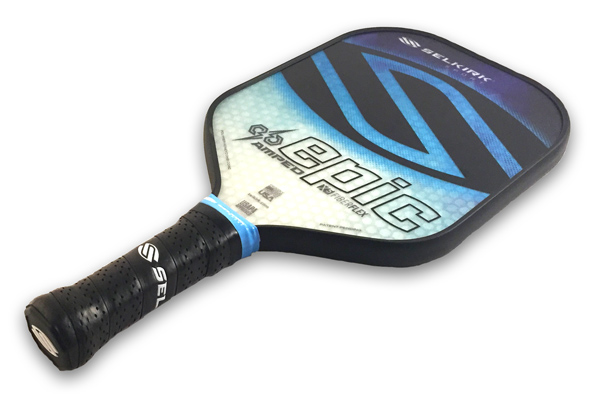 Nothing is more exciting than getting a brand new paddle in the mail. But it’s even more exciting when the paddle has just been released for sale. That’s the case with the new AMPED series from Selkirk, one of the best pickleball paddle manufacturers in the world.

The new AMPED series by Selkirk is one of the most exciting paddle launches that I’ve experienced so far. The reason is that the paddles are very different from what they typically make. I’ll be talking more about the new technology and how it affects your game later. But this paddle has been a tough nut to crack and I want to tell you all about it.

There are 4 new paddles in this line. They all use the same materials but just have different shapes and sizes. The paddles are the S2, the Epic, the Omni and the Maxima. The Omni and Maxima versions are long-board paddles.

Today, we’ll be talking about the Epic. Selkirk has used this brand name in the past with the 20p and 30p XL Epic paddles. But this time, it’s an entirely different kind of paddle.

If you came here for a quick rundown of the paddle, here it is. The Selkirk AMPED Epic is an amazing paddle that has loads of power, plenty of control and everything in between. This thick paddle is different than the rest. Considering that, it may take a bit of time to get used to. The fiberglass face gives plenty of power to the paddle while also offering a lot of spin to the ball. The paddle weighs around 8 oz and is for strong and advanced players only. You can check it out here on Amazon.

As usual, let’s go over the basic construction of the paddle.

The Selkirk AMPED Epic is a widebody paddle with a polymer core and fiberglass face. It’s close cousin, the S2, differs only slightly. The paddle length of the S2 and Epic are the same, but the handle on the S2 is shorter, making the face a little bit longer. Former tennis players will feel instantly comfortable with the face-heavy, long handle Epic paddle. 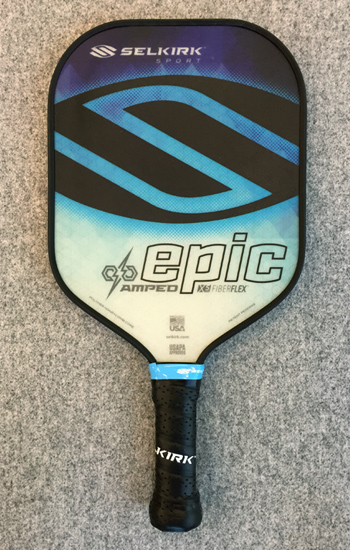 As usual, Selkirk has made a beautiful paddle that feels great in the hands and even better to look at. Its beautiful visual design makes it pop out among the other paddles in a stack and reminds you of the quality. The paddle comes in blue, orange, red and green.

In terms of the paddle’s construction quality, don’t worry, it’s stellar. The paddle will last you a long time as long as you’re not using it to build a brand new set of pyramids. But the main focus of this paddle is what they’ve done to the technology. Let’s take a closer look.

As I alluded to earlier, there’s something special about the AMPED line that hasn’t been seen before from Selkirk. They are using a new, patent-pending polymer (polypropylene) material for their core. They have dubbed this new technology “X5” as you can see plastered on the front of the paddle. I, of course, don’t have the inside details of what this new material is exactly, but I’m 95% certain that it is much lighter than most polymer materials.

Since the core is so much lighter than usual, the engineers were able to make the paddle much thicker. This is the most remarkable difference between the AMPED Epic and other pickleball paddles. Check this out. 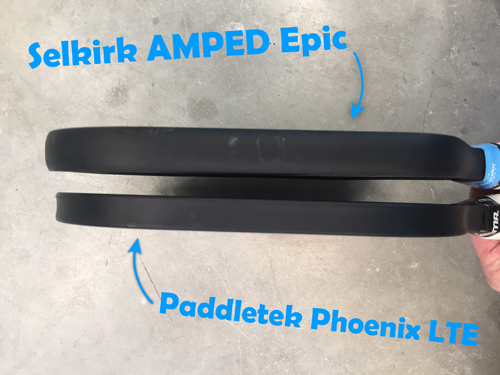 Look at how thick the AMPED Epic is compared to the Paddletek Phoenix LTE on the bottom! It’s almost an inch thick. I’ve never seen a paddle this beefy before. Believe me, its thickness shows on the court in terms of performance.

But even with the AMPED Epic’s girth, Selkirk still managed to create a paddle core that’s extremely light. The reason why I say this is because instead of using the typical graphite face which is common with Selkirk, they are instead using a fiberglass face that they are calling “FiberFlex”. According to the Selkirk website, the FiberFlex is a “Redesigned face engineered to amplify performance”. Fiberglass is a very strong and powerful material that gives you tons of “oomph” behind your shots and some wicked spin to boot.

So what does this mean for you?

I have personally played many, many games with this paddle. It’s very different than most paddles that I’ve played with, but not in a bad way. This paddle performs amazingly well, but don’t get me wrong, there is one downside that I’ll talk about later.

If you want to pick up this paddle, you can expect power, control and everything in between. Let’s get into some of the performance details.

Spin, and lots of it

One popular characteristic of fiberglass faces is that they apply a tremendous amount of spin to the ball. The reason is that when the pickleball collides with a fiberglass face, it will stay on the face longer than graphite would allow. This increase of time gives you ample opportunity to apply spin, and thus creates an unpredictable shot that can easily confuse your opponents. Nice!

If you start using this paddle, expect greater maneuverability than what you’re used to. This is especially the case if you’re coming from a paddle with a graphite face.

Ok, let me just level with you.

The AMPED Epic is an absolute monster.

If you’ve ever played with a nomex core paddle then you probably know what I’m talking about in terms of raw power.

But this is an entirely different experience.

By having a fiberglass face instead of a graphite one, the AMPED Epic gives you a tremendous amount of force behind your shots. These shots feel amazing as well, especially when they strike the heart of the sweet spot. It feels powerful, confident and solid.

Considering everything we know so far, this is one of the strangest aspects of this paddle. I still can’t entirely wrap my head around it. Each shot with this paddle feels incredibly soft, but still has a ton of power behind it. I think this is primarily caused by the thickness of the proprietary X5 polymer core.

Now it gets complicated

There is only one gripe that I have with this paddle. The Selkirk AMPED Epic performs much differently than most paddles on the market. I’ve talked a lot about the thickness of the core, but I do that for a very good reason.

If you’re a player who has great distance control and shot placement, this paddle could take a long time to get used to. The reason is that since the polymer core is so thick, it changes the feeling you have in your hands when striking the ball. Imagine banging a nail into the wall with a ruler instead of a hammer. Imagine what those vibrations would feel like in your hand.

That kind of tactile information can be extremely important. In general, it’s viscerally harder to feel how hard you’re hitting the ball and thus, how far you’re going to hit it.

When I first started using this paddle, I was hitting a lot of return serves out behind the baseline. But during those same games, I was also hitting many third shot drops right into the net. I was hitting them both too long and too short at the same time. Of course, I make these mistakes occasionally, but it was too consistent to be a coincidence.

It was incredibly frustrating.

This didn’t make sense to me until I realized that the AMPED Epic, similar to buying a new set of golf clubs, makes you rethink your distances.

If you’re having a tough time getting used to this paddle, you can’t give up! It’s going to take your brain a while to connect and re-establish the feel of each strike with the distance it provides. Keep at it!

This is why I have to delegate this paddle to be an advanced player’s paddle only. Yes, this paddle does give you great control over ball placement and distance control, but you have to be very good at these things first and foremost. Hopefully, you can hop right into using this paddle without any trouble, but it may take awhile to get used to if you’re not as lucky.

Having said that, the Selkirk AMPED Epic is an amazing paddle. The technological improvements that Selkirk has initiated here are substantial and could spread throughout the rest of the industry. It will be very interesting to see how the design of this paddle will influence other designs.

I recommend giving this paddle a try, especially if you know someone that has one and can borrow for a game or two. As usual, let me know what you think. Have you tried this paddle? What has your experience been? Let me know in the comments below!