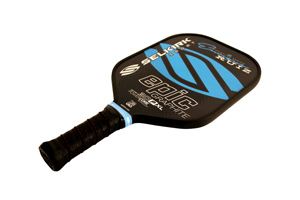 Note (04/23/18): This paddle is becoming harder to find. If you’re looking for a similar option, please check out the Paddletek Tempest Wave. It will be similar, but slightly lighter.

Selkirk is one of the most recognized names in the pickleball paddle industry. And for good reason. They make some of the best and most beautifully designed paddles around. When I first started playing pickleball, I used the Onix Z5 Graphite. But overtime, I started to realize that my game was improving to the point where a nomex paddle wasn’t offering the kind of control game that I needed. I wanted better control at the net, but didn’t want to lose the high power of a nomex paddle. That’s where the Selkirk 30P XL Epic Enrique Ruiz pickleball paddle comes in, and that’s what I’ll be reviewing for you today.

I know, it’s a long name but bear with me. There are two different types of paddles that Selkirk has made like this. Their first is the Selkirk 30P XL Epic, and the other is a version tailored by Enrique Ruiz, a pro player from the northwest. That’s the one that I’ll be looking at today.

According to the story written on the Selkirk website, Ruiz wanted a paddle that fit his playstyle more. Selkirk had done very well with the 30P XL Epic, but Ruiz desired more power, and therefore more weight.

With his assistance, Selkirk developed a paddle with two main differences from the original. They changed the edge guard with their own “EdgeSentry+” technology which added more weight to the paddle. They also changed the grip from their standard Selkirk grip to the Contour Grip made by Gamma.

Let’s talk about the basic construction of the paddle so that you have a clear idea of what we’re working with. In general, the 30P XL Epic Enrique Ruiz is a monster of a paddle. For a polymer core paddle with a graphite face, it’s pretty heavy coming in a bit under 8oz. It’s a widebody paddle measured at 8” wide and a little under 16” high. It’s a pretty standard shape that you’re most likely already used to. The grip is a bit more interesting because it’s almost 5” long, which allows for some interesting mechanics that I’ll explain later. The grip circumference is 4.25” that some would call a medium size.

As usual, it’s a beautifully constructed paddle that feels as great in your hands as it does to play.

Ok, let me just gush for a minute.

This paddle is amazing. I’ve been in love with this paddle ever since I played with it for the first time 4 months ago. What Selkirk says in its marketing language is true. It really is a paddle for the all-around player. If you want power, control and everything in between, this is the pickleball paddle for you. There’s only one catch: you have to have the strength to wield it.

We’re not ripping the sword out of the stone here, but make no mistake, the paddle is heavy even with a graphite face. 7.9 ounces may not seem like a lot, but only adding on half an ounce is a lot when we’re talking about pickleball paddles. This is not a paddle for people with low upper body strength or arm strength. Overhead smashes take a lot of effort with this paddle. If you don’t have the strength to get the paddle angled down quickly enough during a smash, then it’s likely going to go out. There is a way to get around this though, which I’ll explain later.

In general, the 30P XL Epic Signature performs amazingly well. The paddle has a huge sweet spot, it feels balanced in your hand and the balls pops off the face beautifully. Also, in case you live in an area with noise ordinances, the polymer material used is the least noisy of the cores.

Due to the word “epic” splashed on the front of the paddle face, some people may think that this paddle is for power players only. Do not be fooled! The 30p XL Epic Signature paddle has tons of power, but also lots of control as well.

Polymer cores are known for having a great balance between power and finesse. You won’t get as much power out of it as you would a nomex core, but at times it feels like it due to the heavy weight of the paddle. So with this paddle, you get the power of a nomex, but keep the control and finesse that comes with a polymer core. Now that’s value!

A handle on perfection

This is the biggest point that I want to make about this paddle. One of the most unique aspects of the 30P XL Epic Signature is how the grip works in tandem with the weight of the paddle.

As I alluded to earlier, the one catch with this paddle is that it is heavier than most modern paddles. This extra weight can give you tons of power for smashes or baseline power shots, but only if you have the strength for it. But there is a way around this, and it involves the grip.

The grip on this paddle is 5” long, giving you plenty of room to move your hand up or down. One trick to take some of the weight requirements out of the equation is to move your grip closer to the center of gravity. Or in other words, choke up on the paddle!

This is something I do when I use this paddle. Similar to other ball-smacking sports, if you choke down (move your hands toward the end of the handle) you get more power, but it’s harder to swing and you lose control. Conversely, if you choke up on the club, bat, paddle, whatever you’re using will weigh “less” and you gain control, but you lose power. In the case of pickleball, you also lose a bit of reach.

What’s interesting about this is that in pickleball, it’s OK if you lose a bit of power for more control. It’s not as devastating as other sports like golf or baseball. Considering the long handle, you can choke down for serves, then choke back up for the dinking game. It’s an incredible thing about this paddle that I think often gets missed.

Also, if you’re a previous tennis player, then you find transitioning to this paddle easier for those two-handed backhand shots.

Should you use this paddle?

The big question around this paddle is whether or not you consider yourself to be a great all-around player or not. Is every part of your pickleball game solid? Are you good with serves, baseline shots, third drop shots, dinks, smashes and so on? Not only this, but do you have the strength to use an 8 ounce paddle?

Then this paddle is definitely for you.

The Selkirk 30P XL Epic signature paddle is going to complement your game hand-in-glove. It has everything you need for every part of pickleball, and it has it in spades.