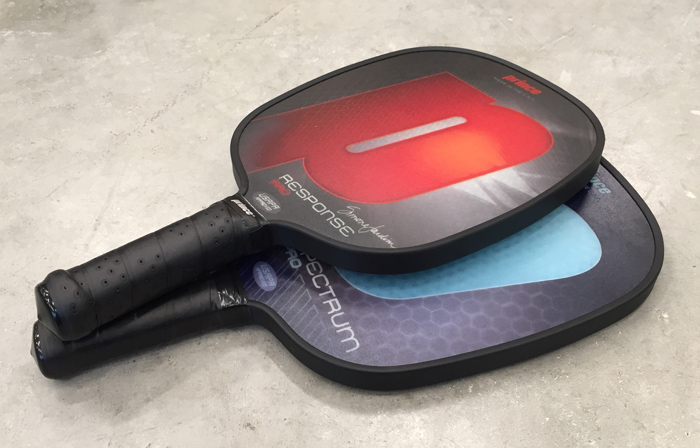 When I first saw the Prince Response and Spectrum paddles, I thought that they looked just like any other paddle that’s ever been made. But that was before I saw the shape. Honestly, I had to do a double take. “Wait, an oval-shaped paddle? What sorcery is this?” Well, it’s no sorcery; at least I don’t think it is. They’re the new paddles from Prince and this review will help you discover them for yourself.

Let’s start with the basics

If you’re not already aware, Prince is a manufacturer of top-quality tennis rackets. Recently in 2018, they partnered up with Paddletek to create their first pickleball paddle. What came out of the partnership is the Prince Response Pro and the Prince Spectrum Pro. For the purpose of this review, I’ll be referring to them as the Spectrum and the Response.

As usual, let’s start with the basics.

At the end of the day, the paddle is pretty standard when it comes to the specifications. Like a lot of paddles these days, you can either go with the lightweight or midweight versions (more on that later). And you can also go with a thick or thin grip depending on your hand size.

I’m not surprised to see Prince go with a polymer core here. It’s a standard in the industry and that probably won’t be changing anytime soon.

The Response and Spectrum also feature a fiberglass face which isn’t a surprise either. Fiberglass gives you plenty of power to your shots and can help you get a bit more spin. But you do miss the explosive or “pop” feeling of a graphite face.

We’ll talk more about this later, but you’re probably curious. The only difference between the Response and the Spectrum is the handle length. More on that later.

I can’t go too far in this review without talking about the shape. It’s easily the most unique element of this paddle and it’s the first thing that people notice. So what’s the deal with the rounded shape?

Like I said earlier, Prince is used to developing tennis rackets. As you know, tennis rackets have oval shapes. The reason they do this is to round out the sweet spot of a racket in order to give the ball a more uniform “sinking” surface. When the ball sinks into the strings, the rounded sweet spot will ensure that the ball goes in a consistent direction.

And that’s exactly what they’re trying to do with the Response and Spectrum. Except this time the pickleball doesn’t sink into the paddle, but a mishit can certainly sink into the net. 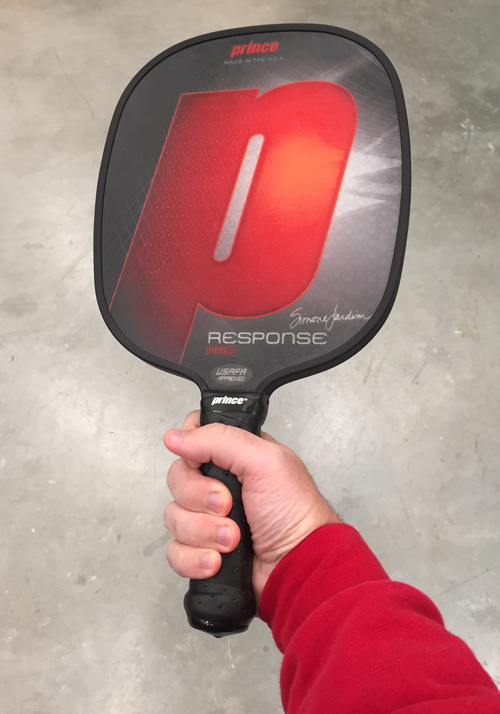 This is what the unique rounded shape does in a pickleball setting. It allows the sweet spot of the paddle to be larger, more consistent and more like the shape of the ball. It rounds out the sweet spot. It’s amazing and I can’t believe it hasn’t been done like this before.

I’ll talk more about how this performs later on, but the most important thing to understand here is that the because of the shape, the sweet spot isn’t as rigid as it once was. It’s now much more flexible because there are no true corners on the paddle!

A sweet spot to die for

Speaking of sweet spots, this one is glorious in every way imaginable. Quite frankly, it’s phenomenal. I rank it up there with the Paddletek Tempest Wave which is a high bar to even get near. But it’s not just the feel of the sweet spot itself. It’s also how consistent and applicable the sweet spot is.

When I explain this paddle to someone, I like to say that the sweet spot on the paddle is very consistent and forgiving. This is mainly due to the rounded shape.

This is especially the case with the neck or hozzle of the paddle. Check this out: 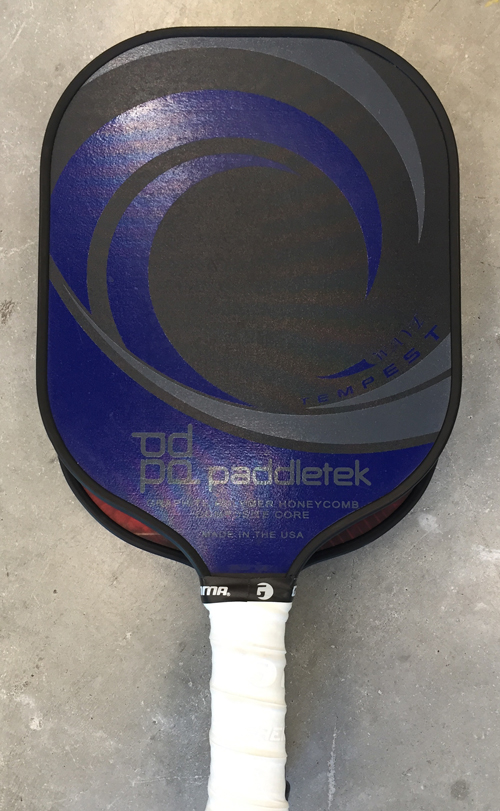 Important note: I know that the Tempest Wave (the one on top) looks wider than the Response below it, but it’s not. The camera angle is playing tricks on us. The Response is slightly wider.

What do you notice about the necks of both these paddles? The neck of the Response (the one on the bottom) flares out sooner than the Tempest Wave on top. This makes mishits that hit the neck of the paddle far more forgiving than usual.

Because of the shape of the paddle, the sweet spot is now larger, wider and much more forgiving. So how does it perform? Unbelievably well.

This is one of the best performing paddles I’ve ever played with. It’s up there with the Engage Poach Advantage and the Paddletek Tempest Wave.

If you’re familiar with any paddle advice I’ve given, you’ll know that I recommend to players that they figure out their preferred weight range. It can be very useful to know what kind of paddle weights you can tolerate. It will make your purchasing decisions much easier.

However, it’s a bit different with the Response and Spectrum. I was shocked when I got my first one (the Spectrum) in the mail. It weighed 8.3 oz, but it felt more like a 7.6! I couldn’t believe it. What this means is that a lot of the weight, especially in the Spectrum, is in the handle rather than further up the paddle face.

This creates a paddle that is incredibly well-balanced and doesn’t have that top-heavy feeling (assuming you don’t like top-heavy paddles). But yet it’s still a beefy paddle in terms of weight. Thus, you get the extra power from the weight without feeling like you’re holding a lead hammer.

Slightly mindblowing to be honest.

Overall, the paddle is powerful, accurate and absurdly forgiving. The rounded sweet spot gives you the confidence to go for shots that you may have avoided in the past such as those pesky dink volleys.

Differences between the Response and the Spectrum

That’s the only difference between these two paddles. However, there’s more to it than meets the eye. Let me explain.

As I said, the only physical difference between the Response and the Spectrum is the length of the handle. But this has profound impacts and will give you a different experience. 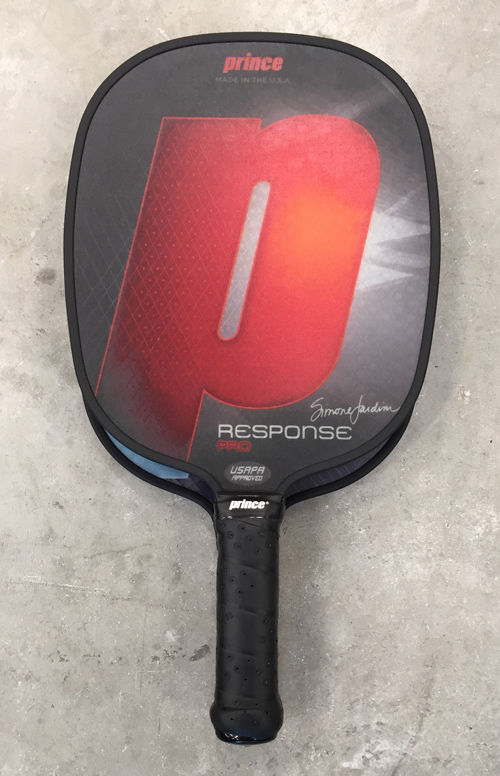 Check out the image above. Notice anything? Both paddles are the exact same height. But since the Spectrum (the blue one underneath) has a shorter handle, it gives way for a longer paddle face. This gives you more face to work with to make the paddle more forgiving than it already is.

But it also changes the way the paddle functions. When you use a paddle with a smaller handle, you’ll feel more of the weight of the paddle even though it’s not any heavier.

Also, it’s hard to get more “pop” or whip when using the Spectrum. The Response feels more powerful on punch volleys and smashes. The reason is that all the weight from the Response is further away from your hand than the spectrum since the handle is longer. The gives you a paddle that has more whip, and thus more power to it.

This is primarily why I use the Response over the Spectrum. However, if you don’t’ care much about that and you’re OK with smaller handles, then the Spectrum will be a good fit.

Who should use this paddle?

In general, this paddle is great for people who have a really hard time hitting the ball solidly and need the forgiveness. Similarly, people who routinely hit the ball on the neck (the spot right above the handle) of the paddle will benefit greatly from using this paddle.

When it comes to recommending the Response or Spectrum to tennis players, it’s probably going to be hit or miss. Most tennis players that I know prefer to use a top-heavy paddle like the Bantam EX-L or the Engage Poach Advantage. Considering this, I can’t entirely recommend the Spectrum or Response, but of course, that’s in the eye of the beholder.

But overall, if you love top-heavy paddles, you’re probably not going to like either of these paddles.

Personally, I’ve already made the switch from the Paddletek Tempest Wave to the Prince Response Pro. Don’t get me wrong, the Tempest Wave is a fantastic paddle, but the Response is just giving me more of what I need: consistency and accuracy. Yes, I lose that explosive feeling of a Tempest Wave smash. But I gain more forgiveness, which is what’s truly important.

If you don’t mind a paddle that isn’t top-heavy and you want more consistency, I would start looking at this paddle seriously.

Just give it a shot

If it’s feasible, I recommend giving this paddle a try. Even if you don’t like top-heavy paddles, just give it a shot.

Having played with this paddle for a week or so, I can confidently conclude that it has aided me in upping my game. My mishits have gone down significantly and my consistency has improved remarkably. If you do give it a shot, please let me know what you think!