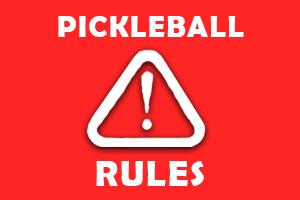 If you’ve been playing for awhile, you probably know how simple pickleball rules are. But even with it being so simple, there are some rules that you may not know which could bite you if you’re not careful. We all know about the general rules that apply in pickleball such as the rules in the kitchen and the double bounce rule. But there are some other, lesser-known rules that are crucial to know especially if you’re playing in tournaments. I’ll be using excerpts from the IFP Officially Tournament Rulebook which is the official rulebook of the game.

People aren’t too stingy about serving rules in recreational pickleball as long as the serve is made within reason. But there are some serving rules that you may not know specifically about the motion.

From the IFP Official Tournament Rulebook:

“4.A. Serve Motion. The serve must be made with an underhand stroke so that contact with the ball is made below waist level (waist is defined as the navel level). (revised Feb. 1, 2013)”

We all know that you can’t serve like they do in tennis, but it’s not just the overhand part. In pickleball, the point of contact must be below the navel. If the paddle head strikes the ball above the navel, then it’s a fault. It also must be an underhand serve.

But what constitutes an underhand serve? Check out this rule:

This is the rule that absolutely defines what an underhand serve is. The phrase, “moving in an upward arc” is really important to understand. You’ve probably seen people who not only hit the ball above their navel but also slice down on the ball or something similar. If you’re going to play in tournaments, you can’t do any of these things.

This is probably why you see professional players using a simple underhand serve, instead of anything too complicated. They don’t want to risk getting a fault.

This one is important because it’s easy as pie to touch the net without realizing it. But this is especially true if you’re playing high-level games at the net. When you’re playing at the kitchen, sometimes you will have to return dinks that hit the top of the net, then fall straight down to the bottom of the net. These are extremely difficult shots to get, but you have to be careful that you don’t touch the net! If you do, you will lose the rally! It’s a fault if:

“7.E. A player, player’s clothing, or any part of a player’s paddle touches the net or the net post when the ball is in play.”

Pretty simple. But not so simple if you’re returning balls near the net. Don’t let yourself touch it for any reason!

Here’s the 10-second rule right from the rulebook:

“4.J. The 10-Second Rule. The “10-second rule” applies to both server and receiver, each of whom is allowed up to 10 seconds after the score is called to serve or be ready to receive. It is the server’s responsibility to look and be certain that the receiver is ready to receive serve.”

Basically, when the referee calls out the score, you have 10 seconds to serve. This is almost never an issue, but it’s important to know in case you need to tie your shoes or attend to any other urgent task on the court. However, if those 10 seconds go by and you haven’t served, the referee can issue you a technical warning. If you continue to delay, they can award the opposing team a point.

This can also happen to the receiving team. You have to be ready to receive the serve once the score has been called by the referee. If you’re not facing the server, or if you’re walking around aimlessly, then once the 10 seconds is up the referee can issue you a technical warming. And like I explained above, if you keep doing it then they can award a point to the opposing team. The biggest reason why this rule exists is to keep people from recuperating and restoring their energy after a tough rally. If there was no rule, then you could just pace around indefinitely as you recuperate.

But If you need to take some time before you serve or receive, call a timeout to be safe. Here’s what the rulebook says about timeouts.

“11.A. Normal Time-Outs. A player or team is entitled to 2 time-outs per game; each time-out period shall last only 1 minute. Then play must be resumed or another timeout must be called by either side. Time-outs may never be called once the ball is in play or the server has started the serving motion. For games to 21 points, each team is allowed 3 time-outs per game.”

This one is huge for competitive play. Proper communication in tournaments is essential for success. But if you communicate too loudly…

“12.H. Distractions. Players may not yell, stamp their feet, or otherwise try to distract an opponent when the opponent is about to play the ball. A player, or anything the player is wearing or carrying, may not cross the plane of the net (or the extension of the net beyond the posts) except when striking the ball. Note: In Doubles, team communication shall not normally be considered a distraction. However, loud communication at the time the opponent is about to strike the ball may be considered a distraction. If, in the judgment of the referee, a distraction has occurred, it shall result in the loss of the rally. (revised January 15, 2013)”

Things like stomping your feet, yelling at an opponent during their stroke and things of that nature are obviously wrong things to do. But what if you’re simply communicating to your partner about something and the opponent is swinging in the process. If it’s too loud, and the referee thinks that it was distracting for the opponent, then he may call the rally early, but not in your favor.

There’s one situation in particular where I could see this occurring often. If I’m playing in an evenly matched game with skilled opponents, I will oftentimes tell my partner what kind of shot is coming their way. I don’t do this for all shots, but I especially do it for spin shots because they can be the trickiest ones to deal with. However, by observing my opponent’s body language, I can tell if they’re about to do a sneaky spin shot. I will then shout to my partner, “spin!”. This is all before my opponent has hit the ball.

No one is ever going to call you out on something like this in casual pickleball. But in competitive play, be aware!

This is the only time in the game where hitting the ball on the line will result in a fault. Your serve will be good if it hits the baseline, centerline or sideline, but not the kitchen line.

Once the serve has been successfully made, the ball can land on any court line, and will always be good.

That brings up our next talking point, line-calling!

I won’t go into a huge philosophical monologue about ethics, but there are a few rules to keep in mind when it comes to line-calling that are important.

No matter how widespread technology becomes for line-calling in pickleball, there will always be times where the players have to make the call. However, there is a code of ethics involved. Let me give you a simple bullet list that goes over the code. You can read more inside the rulebook.

Having a code of ethics in a competitive sport is always going to be a sticky situation. Pickleball can be a fast and frantic game, and it can be extremely difficult to judge a line call. But if you keep these points in mind, then it will be a lot of easier for you when that time comes.

I hope that I’ve explained these rules well! If you have any questions feel free to leave a comment.