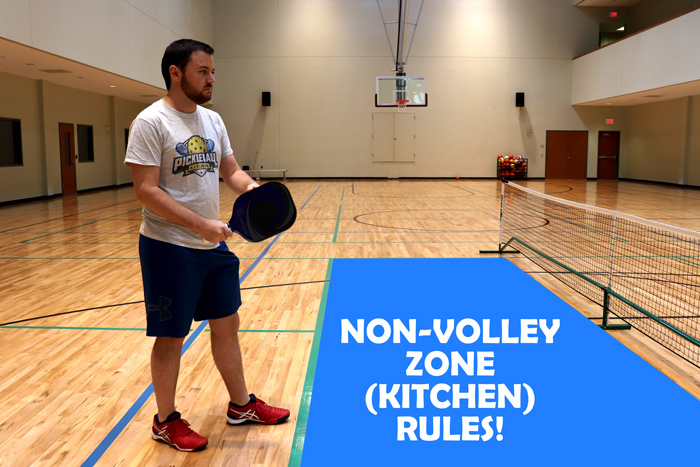 The pickleball non-volley zone or kitchen rule is easily one of the most infamous rules in pickleball. And also one of the most hilarious. There’s nothing funnier than seeing someone volley a ball (hit it out of mid-air) while they are in the middle of the kitchen (which is a fault). Everyone yells “Kitchen!” all at once with an uproar of “Ohhhh!” or bellows of laughter.

If you’re a beginner, I’m going to give you the basics of how the kitchen works. But if you’re an advanced player, keep reading! There are a few extra details about the kitchen that you may not know yet! A lot of players are under the impression that there is only one kitchen rule to be concerned with. But it’s actually a bit more complicated than that.

If you’re here for a quick answer, the kitchen rule states that you cannot be touching the kitchen zone or kitchen line while volleying a ball. Any object that is physically connected to you counts, including your partner. This also includes your momentum that landed you in the kitchen after volleying a ball.

What is the kitchen?

In pickleball, the kitchen is a colloquial term for the non-volley zone. This is a section of the court that is 7 feet away from both sides of the net and extends to each sideline. Take a look at this image: 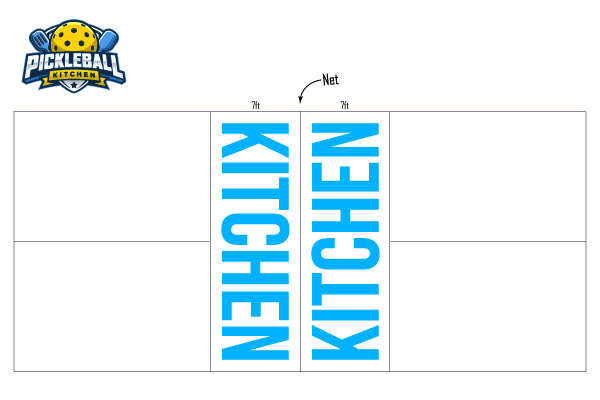 The reason why the kitchen is so well known is that it’s one of the easiest rules to break as a beginner, but also that it’s a unique rule that’s uncommon in other racket sports.

Simply put, the kitchen rule keeps people from standing at the net and smashing everything downward. Imagine if players were allowed to stand at the net while playing. The game would be unplayable. That’s what the kitchen is for.

Here’s one of the most important aspects to understand the kitchen (non-volley zone): the kitchen is the physical ground, not the space above it. It’s perfectly legal to volley a ball while your paddle is hovering over the kitchen zone, but not if you’re physically touching the ground or the line.

Alright, let’s move on to the rules!

Like I mentioned earlier, here is the main kitchen rule: You cannot be standing in, or otherwise make contact with the kitchen zone or kitchen line while volleying a ball. A volley is a fancy word for hitting the ball in mid-air before it hits the ground. This includes the initiation of a volley. Keep that word in mind as you read; it’s very important. Here’s what the rule says in the International Federation of Pickleball’s (IFP) official tournament rulebook:

That’s pretty simple, right? Just don’t hit the ball out of mid-air while your feet are in the kitchen or on the kitchen line. Easy!

However, it gets a bit more complicated than that. The rule also says “anything the player is wearing or carrying”. So yes, it’s still a fault if you drop your paddle in the kitchen after you’ve volleyed the ball, even if you’re outside the kitchen. But it can be anything that is physically attached to you. You’ll get called on a fault if your hat falls off, or even if your keys fall out of your pocket or anything similar. This also includes anything that happens via momentum. As the IFP rulebook says:

I’ve made this mistake before. I was standing about 1 inch away from the kitchen line when I reached for a ball far into the kitchen and volleyed the ball. However, I lost my balance and I placed my paddle on the ground in the kitchen in order to keep my feet from going in. I called a fault on myself though, because the momentum from the volley is what made me touch the kitchen. Whoops!

This also includes balls that are declared dead. So if you’re in a tournament, just don’t ever walk into the kitchen even if it’s a dead ball.

Keep in mind, it’s OK if you volley a ball standing outside the kitchen, while the paddle is over the line in mid-air. The kitchen is the flat, marked area on the ground, not the air above it. Excluding one rule, which is next.

Here’s another important part that often gets missed:

This means that you can’t be standing in the kitchen, jump up to volley a ball, then land outside the kitchen. Fault!

In order to safely volley the ball after being in the kitchen, you must reset your stance outside the kitchen first before initiating the stroke.

What you CAN do in the kitchen

Before we continue, if you want to learn how to get to the kitchen quickly and effectively, make sure you check out this article on how to do so.

Whatever you want! As long as you’re not initiating or volleying a ball.

It’s very common to see players hop into the kitchen to return a short dink. This is fine, as long as the ball has bounced first. You have to be careful with this though because if you’re sitting in the kitchen then you’re also a sitting duck. The reason is that if you’re standing in the kitchen, then any volley you make is automatically a fault. But in order for you to not volley the ball, you’ll have to let it go, or hope it bounces first. In other words, you’re in an impossible situation. If you have to go into the kitchen, get out as soon as you can!

Once you begin to play pickleball more, you’ll feel like the kitchen is some type of pit of endless lava. That can help to get you out of the kitchen if you have to go in, but don’t be afraid of it though! You can perform groundstrokes in the kitchen as much as you want. Just wait for them to bounce, stay calm, step forward, and make a balanced and calculated stroke.

With all that said, you’re probably wondering, “Where should I stand if the kitchen is so dangerous?”

Where you stand on the court will change depending on what’s going on with the game, but in general, you want to be as close to the kitchen as possible without being on the line. This is especially true during a consistent dinking rally. This is a concept called “toeing the line”.

I got this from Sarah Ansboury, a professional pickleball player who has made a huge name for herself. Toeing the line simply means that your feet are lined up just a few inches behind the kitchen line. This assures that you’re as close to the kitchen as possible without going in.

Believe me, this takes practice, especially if you’re a beginner. It’s very easy to lose your sense of where the kitchen is while playing. But eventually, as you play more, you’ll be able to “feel” an imaginary wall in front of you that will mentally keep you from going in. It takes practice, but it will come.

If you’re a beginner, try to focus on running up to the kitchen line as much as possible. This is not only the correct way to play the game, but it’s also going to give you better practice when dealing with the kitchen rules.

Knowing all the rules about the kitchen is important, especially if you’re going to be playing in tournaments. As usual, leave a comment down below and let me know if you have any questions.