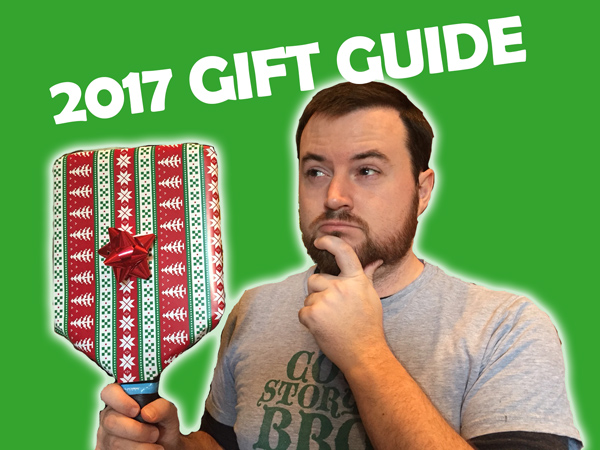 I know what this is like, but if you have a pickleball-obsessed loved one in your life, you’ve come to the right place. I’m also a pickleball fanatic, and I know exactly what you should get them. The items below are great gifts for any pickleball player regardless of skill level or involvement in the game.

OK, let’s get to shopping!

If you’re looking to get someone a great paddle for Christmas, don’t you worry, I’ve got you covered. There are hundreds of paddles you could get someone, so I’ve narrowed down a few that would be great for certain people. I’m also going to include some inexpensive options in case you’re on a budget.

The #1 paddle that I almost always recommend to anyone is the Paddletek Tempest Wave. This paddle is made by one of the best manufacturers in the world, Paddletek. They’re known for making high-quality paddles. The Tempest Wave is easily the best paddle they’ve ever made and will most likely become legendary status within a few years.

No matter what skill level they’re at, this paddle will work well for them. You can’t go wrong with this pick.

Got a strong man in your life?

If you know a guy who is either young or just very fit, there are a few great paddles that will work well for him. These are beastly paddles that heavy and ready to destroy! Keep in mind that a strong and athletic can use these paddles as well. They just seem to be marketed mainly to men.

The #1 paddle I recommend for a super strong player is the Selkirk AMPED Epic. This is the newest paddle on the market currently and it’s amazing. It’s also the most technologically advanced. This paddle will give them great power and control over their shots, but also applies a ton of spin. I recently did a review on this paddle which you can check out here.

A bit cheaper option for this is the Selkirk 30P XL Epic Enrique Ruiz. This is also a beastly paddle that packs a lot of punch. I used this paddle for many, many months and I loved the crazy amounts of power that it gave me. I reviewed the paddle as well so if you want to read more about it you can go here.

Is grandma addicted to pickleball?

I know the feeling. Well, besides the whole grandma thing.

Not all women need light paddles, but most older women do. If I had to pick one paddle to suit their needs, it would be the Paddletek Phoenix LTE. I used this paddle for over a month at one point and loved it. I had to move on to other options because it was too light for me, but it worked well for the time being.

Another great paddle for them is the Paddletek Element. This is especially great for former tennis players. Either one of the options listed here will work well for them.

In case you’re on a tighter budget these are some cheap options that are still high quality. These paddles also work very well for beginners.

I already talked about this paddle above, but the Phoenix LTE is one of the most high quality, but inexpensive paddles.

A great, inexpensive option to get someone is the Selkirk NEO. This is a great paddle, especially for competitive players. This one is considered Selkirk’s beginner paddle.

Other cheap paddles that I recommend are the Rally Tyro 2, but keep in mind that this paddle cannot be used in USAPA sanctioned tournaments.

If you want to go the simple route, you can just get the Pickleball Central sling on bag. It’s a very simple bag that has two pockets. I wrote a deeper review about it, but it has room for 3-4 paddles and some basic stuff like a phone and wallet. When I used this bag, I was able to put 3 paddles in the main pocket plus a water bottle. I then had my keys, phone, and wallet in the front pocket. The bag gets pretty full at that point, but it works!

Another great option for bags is the Pickleball Central duffle bag. This one is much bigger than the sling on bag and can hold up to 8-10 paddles. This is a great option for someone who takes an arsenal stuff with them to the pickleball courts. With this bag, you can fit 3-4 paddles, a pair of shoes, a water bottle and still have room for other things. There’s also a few pockets on the outside where you can hold stuff like phones and keys.

In case you have someone in your life who is seriously obsessed with pickleball, I’ve got some recommendation for pickleball nets.

If you’re not familiar with pickleball, most pickleball locations use portable nets instead of nets that stick permanently into the ground. These types of nets are very popular and almost everyone knows how to use them.

But some serious pickleball players actually own a net of their own. They will sometimes set it up outdoors and either play full games or just practice with it. For these people, getting a pickleball net for Christmas would be the greatest thing ever.

At the time of this writing, the best and most commonly used net is the 3.0 Portable Pickleball Net System. It’s the most standard net that’s used in most USAPA sanctioned tournaments. This is the net that I recommend to everyone.

If you know a family of 4 or greater that have recently been bit by the pickleball bug, then getting them a pickleball set can be a great way to get them up to speed. There’s a few sets that I recommend.

If you want to give them the absolute works, then the Rally NX Graphite Deluxe Set is going to suit your needs the most. This set gives you absolutely everything you need to get started. This set gives you a net, 4 paddles, balls, line tape, and bags for it all. This is the super deluxe option.

A less expensive option would be the Rally Tyro 2 Pro Set. This option is the same thing as above, but the paddles aren’t as high quality.

Is it only a couple you’re buying for? Or maybe your niece and nephew? If you don’t want to include a net in the bundle then going with the Selkirk NEO set is a great option. This one includes balls and two paddles, but no net.

The cool thing about pickleball is that most people who are into are utterly obsessed with it. Because of that, many random, quirky and hilarious gift items have been made about pickleball. One example is the great “don’t dink and dive” shirt. You can also search through Amazon and find a bunch of different pickleball shirts ready to be purchased.

But if you’re looking for a great list of stuff, then you can head over to Pickleball Central which has many things to choose from. You’re sure to find something there. The list includes things like money clips, charms, necklaces, water bottles and even gift cards in case you want to go that route.

I hope that article has helped you to narrow down your Christmas shopping! Believe me, pickleball players love their sport. Anything you give them they will love wholeheartedly!