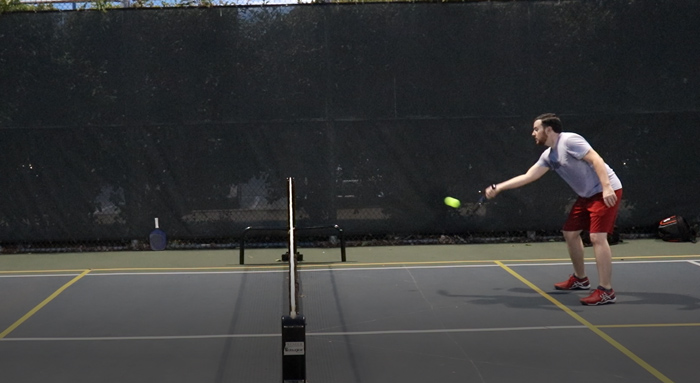 We’ve all heard it a billion times. Get to the kitchen as quickly as you can! I bet that you’ve been out playing and someone has said this to you. It’s so true and it’s great advice! But it’s a bit more complicated than that.

Getting to the kitchen as quickly as you can in pickleball is extremely important. In fact, it’s one of the most difficult aspects of the game. The question is, how do you do it effectively? That’s what I’m going to be talking about today.

Why is it so important?

If you’re reading this, then you’re probably a beginner or intermediate level player. If so, I’m glad you’re here! You’ve come to the right place to learn about pickleball. Bear with me while I explain this. It’s super important.

This is one of the core principles of pickleball strategy: whichever team is better established at the net is the team that has better control over the game and is more likely to win the point. Let me list out a number of reasons why.

Let me explain the shot angles that I talked about above. Check out this image: 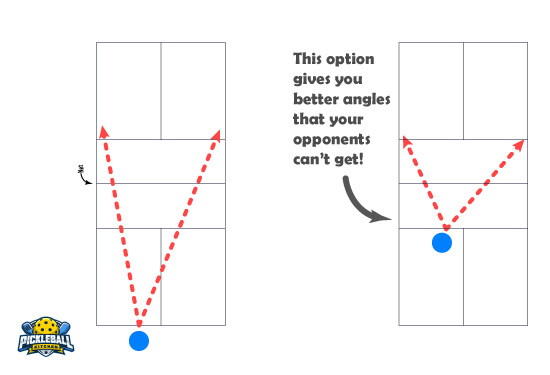 Imagine those red lines running all the way off your screen. Now compare the two examples. Do you see how the angle is much wider on the right example than the left example? Being at the kitchen line not only means that you can make these shots, but that you can deal with your opponent doing them as well. These angles are essential to scoring points in pickleball and are a constant threat for you and your opponent.

So in other words, you want to be at the kitchen line at all times!

Now, let’s look at one of the most important examples of this lesson. 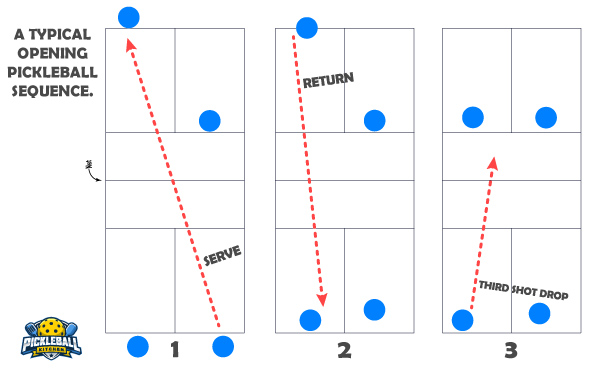 Ask yourself, who has the advantage here? If you guessed the referee, well, I’m not sure how that’s even possible. But if you said the defending team, then you’re right! Hooray!

There are only two things that will save the serving team in this position. The third shot drop, and getting to the kitchen quickly. This article won’t talk much about the third shot drop, but it’s an extremely important shot to learn.

As long as the serving team can get to the net, they’ll be in a much better position.

So that’s why you want to get to the kitchen as quickly as possible. Hopefully, I’ve convinced you why this is so important. But the big question looms: how do you do it? It’s a bit more complicated than you think.

Getting to the kitchen as the defender

Okay, let’s talk about this from the defender’s point of view first. This part is easy and will almost never change. 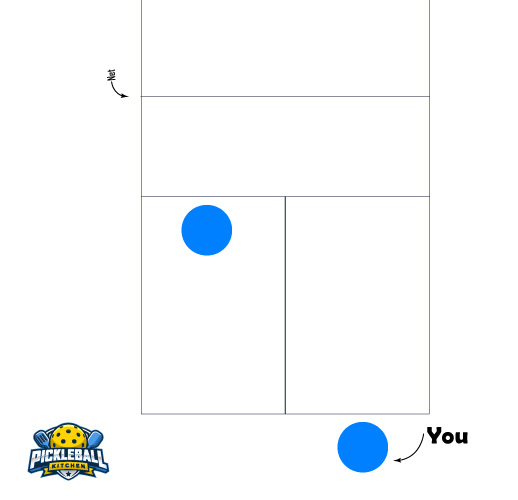 This is the easy part. Right when you hit that return serve, run to the kitchen! Get there as quickly as possible. In pickleball, there is absolutely no reason to do anything else.

Getting to the kitchen as the serving team

This is where it gets complicated. On the outside, it may seem easy as the serving team to get to the kitchen, but it’s not. There are a lot of nuances in this. In order to simplify things though, let me give you the perfect scenario first, then we’ll go from there.

When all goes well

As I explained earlier, in order to get to the kitchen quickly, you have to hit a great third shot drop. The better the third shot drop is, the more time you’ll have to get there. So in a perfect world, you or your partner hits a great drop shot, and you race to the kitchen.

The problem, of course, is that this perfect scenario rarely happens for beginner and intermediate players. What typically happens is the disaster scenario or something less.

What I see the most often in beginner and intermediate play is a third shot drop being hit way too high. It happens! I’ve done it too. But the end result of this is quite devastating.

The defenders will easily smash the ball and you lose the point. Also, it’s quite common to see players running forward even though you or your partner hit it up too high. You can imagine the results.

Here’s what you need to do in this situation. If you or your partner hit the third shot drop too high, you need to stay put outside the baseline. Don’t run forward! If you do, all you’re going to get is a screaming ball right to your feet.

What you have to do instead is attempt a fifth shot drop. If you hit that one too high and it comes back fast then attempt a seventh shot drop and so on and so forth. You get the idea. If you’re in this type of disaster scenario, your main goal is to survive. Keep trying those drop shots until you finally get one to work, then you can start moving forward.

When to actually move forward

Okay, here’s where things get extremely complicated. As you know, I can’t sit here and type out every single scenario that can happen if the third shot drop isn’t perfect, but isn’t a disaster either. There are a bazillion different things that can happen. Instead, I want to give you principles. This is the one visual that you need to see. 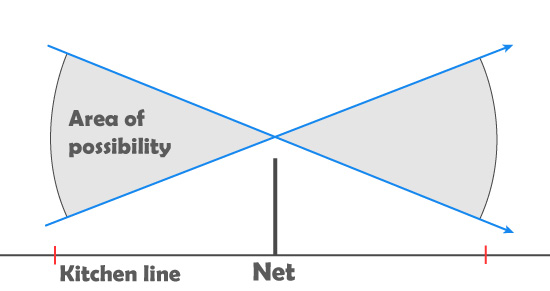 The “area of possibility” represents all the different lines that the ball could possibly travel.

But, if they have to hit a ball that’s low on their side, then you can move up further because the last thing they want to do is pop up a ball for you to smash. Thus, they’re forced to dink it over.

When it comes to getting to the kitchen, the lower the ball is on their side, the safer it is for you to move up. Why? Look at the image again. If the ball is too low, then they can’t hit it too hard else it will go high. When the ball goes too high, you smash and win the point!

While you’re running to the kitchen…

Sometimes it can be difficult to get all the way up to the kitchen. It’s an awkward run because you have to get there quickly, but then you also have to stop quickly. If you have to stop too quickly then you could lose your balance and everything falls apart from there.

The key here is to try not to actually run but jog instead. Over time, you’ll figure out what’s best for you, but doing something around a light jog is going to be great for you.

Getting to the kitchen is more art than science

The hardest part about getting to the kitchen is being aware of what’s going on. You have to learn when people hit hard shots and how. But as usual, the more you practice this, the better you’ll get.

I hope that this article has helped you understand how to get to the kitchen effectively! Remember, stay patient and keep playing pickleball!