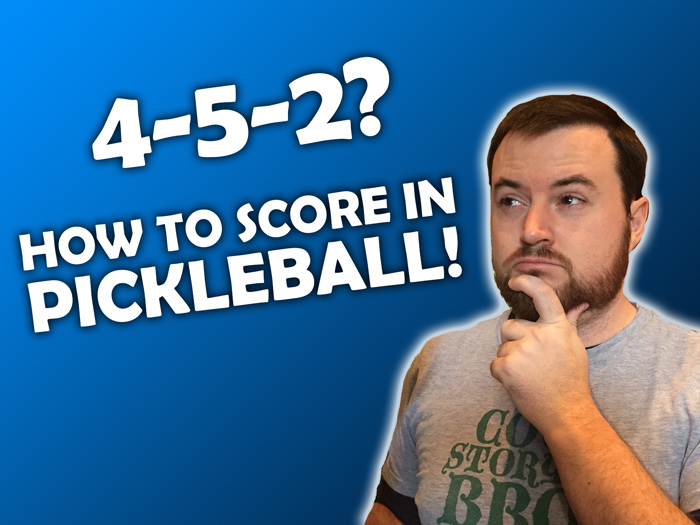 There are many jokes, expressions and hilarious uses of wordplay in pickleball. But one of the more “funny and kind of true” jokes is that learning how to score in pickleball is more difficult than learning how to play the game itself. We all know it isn’t true, but sometimes it seems like it!

In this article, I’m going to teach you everything you need to know about scoring in pickleball. I’m going to go over what the scoring numbers mean, how to do it and how to never lose track again!

How does scoring work in doubles pickleball?

If you’re here for a quick answer, here are the absolute basics of what you need to know: scoring in pickleball goes to 11 points. It can sometimes go to 15 points in tournaments. You can only score a point when your team is serving and when you do, you switch positions with your partner. Also, you have to win the game by 2 points. Those are the basics.

Now, before we get into pickleball scoring, I need to explain some basics on how doubles pickleball works. The first element we need to go over is serving.

Keep in mind that scoring in pickleball is not rally scoring. If you want to learn more about rally scoring, you can head on over here for a great article on the subject.

In pickleball, you can only score a point if your team is serving. Notice how I said “team”. That’s right, each player on a team gets to serve at least once. So how does that work?

When it’s your teams turn to serve, the player on the right side of the court will always be the first person to serve.

This makes it easy and fool-proof in terms of figuring out who serves first when it’s your turn. So, when you think about it this way, the person on the right is the first server and the person on the left is the second server.

However, it doesn’t go in sequential order like that. Teams don’t serve only twice and then the other team gets to serve. Instead, a player gets to keep serving if their team scored a point. This means that you can get to 11 points and win the game with just one person serving. But what happens if you’re serving and you hit it into the net or your team otherwise makes a fault? Then it’s your partner’s turn to serve. That player then becomes the second server.

If he messes up, then you’re all out of serves! This is called “side out”, which means that your side is out of serves and now it’s the opponent’s turn to serve.

Another thing that I’d like to add is that when your team scores a point (remember, you can only score a point if you’re serving), you switch places with your partner.

It’s a pretty simple rule in pickleball, but I want to mention it because it’s going to be very important to help you keep track of the score. More on that later!

You have to win by at least two points in pickleball. There are no exceptions to this rule. This means that if your game is playing to 11 points and the current score is 10-10, then getting to 11 points isn’t going to cut it. You will have to go to 12 in order to put yourself two points ahead of the other team. Then you automatically win. This can go on forever until the two-point spread is achieved.

Now that you understand how serving works in pickleball, let’s add in some numbers. The scoring numbers work a little bit differently than other racket sports. And quite frankly, the score can get quite complicated. In fact, there are more pickleball debates in recreational play about the score than there are about line calls. Here’s an example of what the score can look like: 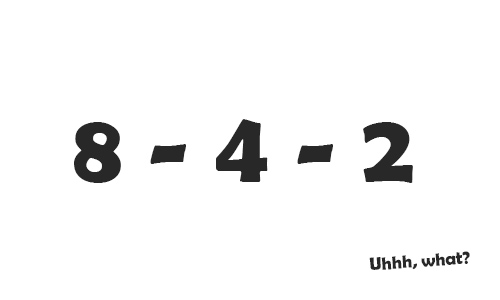 Now, if you’re familiar with pickleball already, you know exactly what this is. But if you’re not, then you’re probably the most confused you’ve ever been in your life. I feel you. I’ve tried to explain the pickleball scoring system to people in person and all I see is their mouths slightly ajar and they’re looking at me like I have fun-sized Snickers bars dancing in my hair.

I mean, no one likes fun-sized Snickers bars dancing in their hair, right? In order to avoid this, let me give you a rundown of what the numbers mean.

What do the scoring numbers mean?

Here’s how it works: 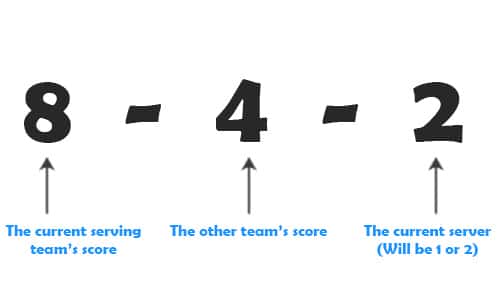 The most important thing to remember when it comes to the score is that whichever team is serving the ball, will have their score called out first, then followed by the opposing team, then the server number.

Check out this image: 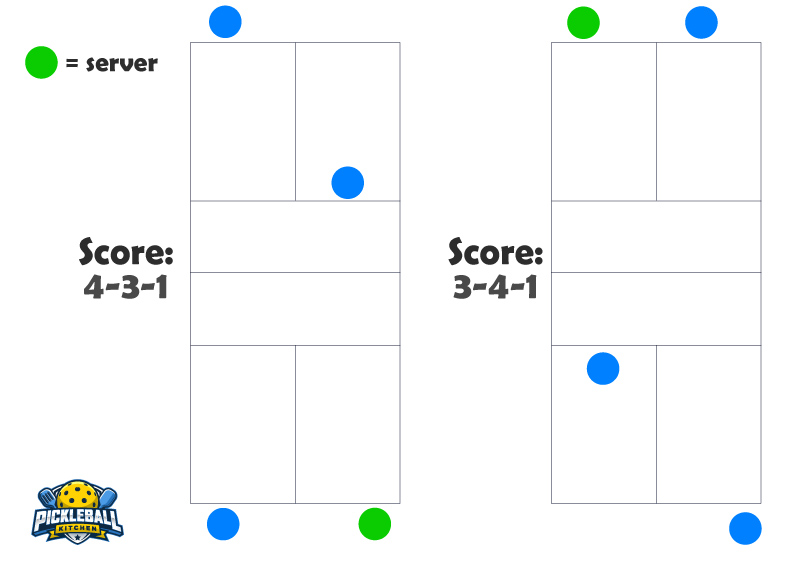 The second pane shows the opposite. Now, it’s your opponent’s turn to serve. The player on the right side of their court will serve and the score is 3-4-1. Like I said earlier, their score comes first because they’re the ones that are serving.

Remember how we talked about how each team gets to serve twice, one serve for each player? That’s what the far right number refers to. So for example, if “side out” is called and it’s your teams turn to serve, then whoever is on the right side of your court will serve first. Since that player is the first server of your turn, the number at the end of the score will be “1”, symbolizing first.

Your team could move on to score a few points, then mess up. Oh well, you scored a few points, but now it’s your partner’s turn to serve. Once your partner makes a fault, then it will be “side out” and the serve will now go to the opponent.

Let’s look at a full example

There’s nothing better than starting a fresh game of pickleball. But before we get started in this example, there is one odd thing that I have to clarify. The team that starts the match will only have one serve. I’m not entirely sure why this is the case, but it’s just one of these things that you have to memorize.

So when you start the game, the person on the right will always serve first. The score will be 0-0-2 or as most people say, 0-0-start. Remember, this only happens for the first team at the very beginning of the match.

Let’s move on to an example. Imagine for this example that you’re the one starting the game. The score is 0-0-2, or 0-0-start. You serve over the net and your opponent completely misses. Point! Your team gets a point and you switch places with your partner. Like this: 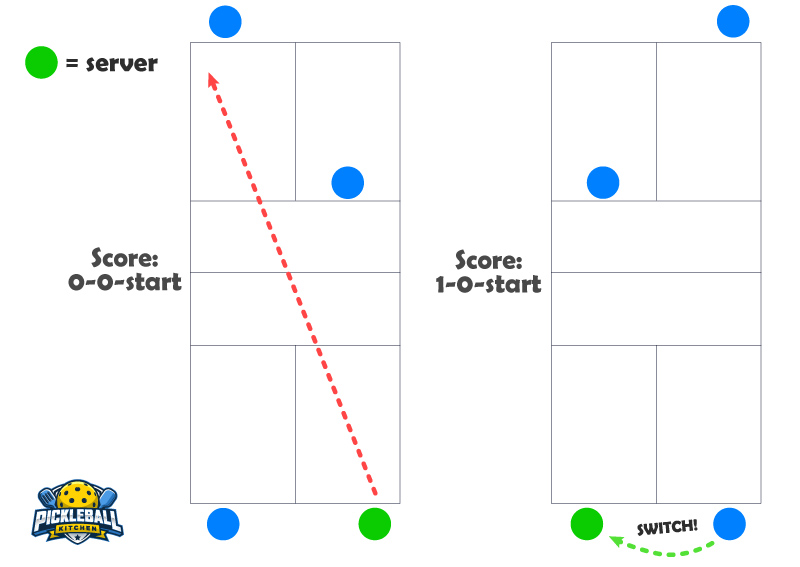 Nice! Now the score is 1-0-2 or 1-0-start. Since you were serving and scored, you get to serve again. But this time, you hit it right into the net. Whoops, it happens. I’ve done it too. Since you were the second server, “side out” is called and now it’s your opponents turn to serve. Can you guess what the score is?

He serves the ball again and your partner can’t get to it. That’s another point for them. The score is now 2-1-2. He serves once more, but it hits the top of the net and falls into the kitchen. Fault and side out!

Now it’s your team’s serve. Guess what the score is? If you guessed 1-2-1, you are correct. Your team has one point, they have 2 points and your team is on the first serve.

Create these examples in your head

The best way to practice scoring, of course, is to play pickleball. But you can also create these examples like I did above. Playing these out in your head can help you understand the way scoring works and is kind of fun at the same time. Scoring in pickleball can take time to learn, but as you continue playing, you’ll get used to it and it will become second nature.

But like in the beginning, there is often a lot of confusion about scoring. That’s what we’re going to talk about next.

How to keep track of the score

Here’s where things get interesting. Pickleball seems like an impossible sport to keep score in sometimes. There’s a neat trick though. And thank goodness this trick exists! But let’s go over something first before we get to the trick.

Call out the score when you serve!

First and foremost, it’s actually against the rules. It’s not that big of a deal in recreational play, but in tournaments, it is a big deal assuming you don’t have a referee. If you don’t call out the serve and then proceed to hit the ball, it’s a fault.

But it’s also common courtesy. Calling out the serve helps the other 3 people on the court keep track of where things are. This is especially true if it’s near the end of a game. Your strategy can change significantly if the opposing team is about to win. If you don’t know it, that could be a disadvantage.

Do the right thing and belt out that score every time you serve.

I know, it sounds confusing, but once you put it into practice, it’s a genius system that works flawlessly. Here’s how you do it.

At the very beginning of the game, note who is on the right side for each team. 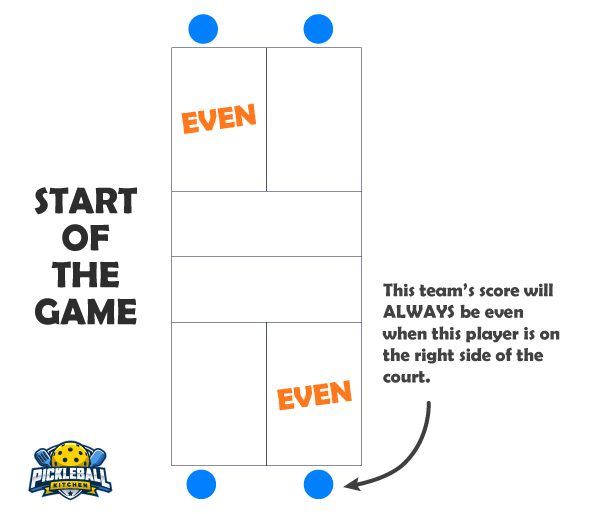 Always! And it doesn’t matter if you’re serving or not.

That’s the trick. Try to play it out in your head, or draw out a court and try it. It will work every single time.

Likewise, whenever your partner is serving, since he started on the left side of the court, your team’s score will always be odd when he’s on the right side. Make sense? Use this trick and you will never lose track of the score again.

How to score in singles pickleball

Scoring in singles pickleball works the exact same way as doubles. All of the tricks that I’ve shown you to keep track of the score will work the exact same way. The only aspect that is different is when “side out” is called.

When the player loses their serve, the ball goes to the opposing player as usual. But the server will go to a side based on whether or not their score is even or odd. It’s that simple. 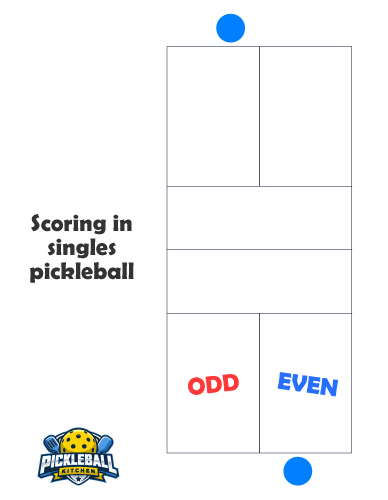 Well, that’s it for me. I hope this article helped you through some of the basics of scoring in pickleball. I know it’s difficult at first, but once you use the tricks that I talked about above, it will become much easier. Thanks for reading and let me know if you have any questions.