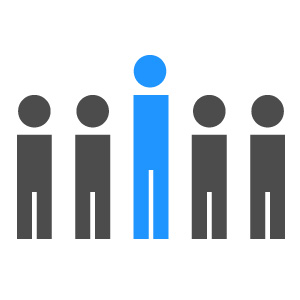 I have had the pleasure of playing against many types of opponents in my pickleball journey. I’ve played against old people, young people, super ripped dudes, grandmas, and even tournament players. But there’s one type of opponent that always seems to give me the most trouble. These are the extremely tall pickleball players. Their wingspans rival pterodactyls and they seem to perch on top of the net smashing anything that you give them.

I’ve played against quite a few tall pickleball players. I’ve also had the pleasure of getting clobbered by them as well. Every time I lose against a tall player I learn a bit more about their secrets. I want to share a few of them with you today.

Do they really have an advantage?

The reach that they have is pretty easy to understand. Tall people have longer arms than we regular height people. No matter where you hit it, they are far more likely to reach for the ball in order to hit it back. This is why when you’re playing against a tall player, you have to expect the extraordinary. Don’t think that hitting that shot on the line will be enough. Be ready for anything!

The other advantage they have, and probably the most important, is the angle of attack. As illustrated below, tall pickleball players have a greater angle of attack when hitting their shots. 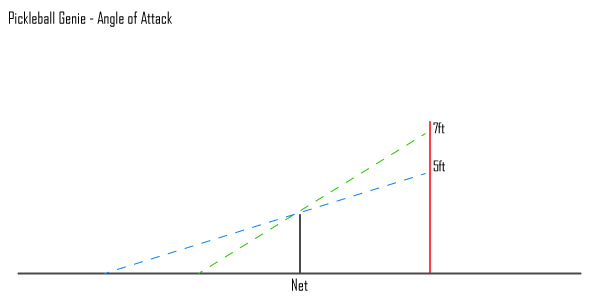 Not only can they make monster smashes, but every shot has a steeper angle that puts more speed and force behind the ball. This makes the shot harder to return and more unpredictable. What’s even more devastating than this is that due to this angle, it’s easier for them to hit shots to your feet.

If you’re not ready, you could pop up the ball into the air right in their smash zone. The next you will see is money signs in the player’s eyes as they go for the slam dunk.

So yes, they have an advantage.

But what can you do about it? Let me give you a metaphor to chew on first.

Be the mouse, not the cat

As usual, let’s begin with principles. Everyone knows about the relationship between the cat and the mouse. The cat is typically described as powerful, overbearing and large whereas the mouse is described as small, weak but nimble. When you’re up against a tall player, you have to be the mouse, not the cat. The “cat and mouse” principle applies to everything that you will read below.

Cunning and clever play is how you beat a tall pickleball player. Imagine you’re a mouse getting into a fight with a cat. Can you take them head on in a 1 vs. 1 battle? Definitely not. In order to beat the cat, you must use your smarts to trick the cat into making mistakes.

The same metaphor applies for playing against tall pickleball players. You can’t take them head on, but must play around them. Here are some ideas.

The most important point to make is to not gift wrap shots for them. What I mean by gift wrap is to pop the ball up in the air making it easy for them to smash it. Given their extreme angle of attack, giving them the option to smash the ball basically concedes the rally.

Obviously, this is important to follow against all players. And I know, it’s easier said than done. However, it’s more critical here than with shorter players. Make a conscious effort to keep the ball low over the net. Also, if you’re going to do a lob shot, make sure it’s high enough! We’re talking at least around 10 feet high off the ground. If you’re expecting the extraordinary out of them, then certainly they can reach for those high shots, right?

Aim below the knee

If there’s one disadvantage that I’ve noticed about tall pickleball players, it’s that their height makes it harder to hit shots at their feet. To take an extreme example for clarity, imagine you’re a giraffe reaching for your toes. It’s going to take you longer to reach down that far due to the sheer distance. The same applies for taller players. If their stance is awkward, or if they’re out of position, hitting to their feet can be devastating.

I learned this trick from Mary Hodge and David Wilmot, local pickleball teachers here in Dallas, TX. I was talking to them about this subject when David mentioned that you should try to aim for their gut. This will require you to hit directly at them, but don’t worry, most people don’t mind and pickleballs don’t hurt.

As you know, tall people have long arms that allow them to reach far. However, situating their paddle to defend body shots is difficult and awkward for them. They will probably be able to react in time, but it will force them to make what David calls a “cramped shot”. This increases their chance to make a mistake, or for you to capitalize on a smash.

Keep it at the net

Almost everyone in pickleball says to keep the game at the net. But this is especially true against tall players. The last thing you want is to get into a long game battle with them. As I explained above, their angle of attack will make their returns much harder than yours, increasing the likelihood that you will make a mistake.

You can avoid this by strictly playing a dinking game. By doing this, you’re taking most of their advantage out of the equation, making the battle even.

So in conclusion, playing a cat and mouse game with a tall player is how you beat them. Don’t gift wrap shots, keep them low to the net and aim for their feet!
How do you play against tall pickleball players? Got any tricks in mind that are missing? Let me know in the comments!