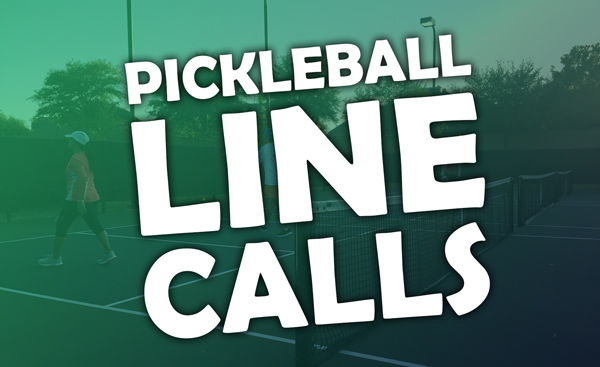 One of the most common questions that I get in teaching pickleball has to do with line calls. It can be frustrating to be on the wrong side of the line call. But on the same token, it’s important how pickleball lines work and how to call shots properly.

When it comes to whether or not a ball is in or out, here’s what you need to know: If the ball physically touches the paint that the line is made of, it is in. If it does not touch the paint and lands outside the zone in question, it is out.

Let’s get into some more detail, shall we?

What is a line exactly?

I used to love going to baseball games when I was younger. I always imagined myself running around the bases and doing all the things that baseball kids do.

But the one thing that always confused me was why there was “sand”, as I called it, at the very back of the outfield.

Well, this is called the outfield warning track. It warns players that a giant wall is about to greet them in the face if they’re not careful.

But that doesn’t mean that the baseball outfield warning track isn’t a part of the field just because it’s a different color.

What this means is that the line IS the court, or whatever section you’re looking at. What constitutes as “out” is what is fully outside the physical paint on the ground that the line is comprised of. Which brings us to our next part.

Just as a side note, if you’re looking for a bunch of other great pickleball tips, make sure you check out this article that gives you 101 tips to work on!

If you come from tennis or any other racket sport that uses a squishy ball, this may take some time to get used to. The reason I say this is that the pickleball doesn’t compress! Unlike a tennis ball, when the pickleball lands on the ground, only a small portion of it actually strikes the surface.

This is what makes line calls in pickleball especially tricky. When you’re making a line call in pickleball, you’re only calling the shot based on that tiny area the ball strikes.

There’s a lot of confusion in pickleball about the “hover” issue. What this refers to is how the ball touches outside the line, but a part of the ball is still hovering over the line. Here’s an image to illustrate what I’m talking about:

As you know, if you hit the kitchen or kitchen line on the serve, it’s a fault. It doesn’t matter if the ball hit the net or not.

But one question that pops up (pun absolutely intended) a lot is about where the line begins and ends. It’s simple. The kitchen line extends all the way to the sideline, then up towards the net. Your kitchen sideline ends just below the net.

The main rules you need to know

As I said above, if the ball touches the physical paint that the line is made of, it’s in. If it doesn’t, it’s out. But it gets a bit more complicated than that.

The benefit of the doubt

It’s your responsibility to make line calls on your side of the court. This means that you’re basically calling the balls in or out for your opponent’s shots. However, if there’s any doubt about whether the ball was in or out, then the ball must be declared in.

This is why line calls in pickleball (and any other racket sport) must be made instantly! There can’t be any doubt that the ball was in. If there is doubt of any kind, the point goes to your opponent. So, when in doubt, be careful!

A common question I get about line calls in pickleball is about hitting an out ball or not. For example, the ball just bounced out of bounds, you call it out, and then you hit it. Is the ball still in play?

More importantly, this counts even if the “out” call happened after you hit the ball since the assumption was that indeed the ball was out.

Having said that, if you hit a ball that hasn’t bounced, but it was clearly going out, the ball is still in play because you have to let it bounce first.

Having said all this, it’s important to have integrity and be honest. Considering that calling lines can be difficult in pickleball, the rulebook has a code of ethics that you can read through. It describes a code that encourages players to be honest about their calls.

Also, remember that pickleball is very social and has a strong sense of community and culture. Everyone knows each other in most pickleball communities.

Don’t let your reputation as a player be tarnished because you’re known for making bad line calls.

Again, if there’s any doubt that a ball was in or out, call it in!

If your partner calls a shot in and you call it out at the same time, the ball is in! We’ll talk more about this below, but I wanted to mention it now because it’s an important rule to know.

If you get a bad line call in open play, then there’s nothing you can do about it unless your opponent agrees.

However, in a tournament, you can appeal to the referee to ask if they saw it or not. In a match, the referee is primarily responsible for foot faults a the kitchen. So it’s common for the referee to not be watching the lines.

But if they do see it, then they can overrule your opponent’s call. But again, don’t expect them to be watching the lines all the time. Their main responsibility is watching for foot faults.

How to make accurate line calls

There’s a bit of science behind making accurate line calls. Let me explain.

It’s common for beginner and intermediate players to simply watch the ball as it’s hitting near the line. There’s nothing wrong with that, but there’s an easier way to tell if a ball went out or not.

It’s all about seeing what’s happening near the line. Check out the image above. In the left image, it may be a bit hard to tell if the ball is in or not.

However, the key here is to not directly see the position of the ball, but to discern if you could see paint behind the ball.

(Remember, all of this is going to depend on your position and perspective on the court)

In the image above, you can clearly see paint behind the ball. Since you can, the ball is in. But if you can’t, then the ball is out. Try to use that principle with your line calls and they will become much more accurate.

Choose who calls what on your side

If you’re currently or wanting to play competitive pickleball, you have to understand who should be calling what shots on your side. There’s a lot of strategies involved with this stuff and it’s very important.

In this image, we’re pretending that my partner and I are serving. If the return is coming back and it’s heading towards my partner, who should make the line call if it goes out the baseline?

The answer is me (I’m the one in the glasses.) The reason why I should call that is that I have a perfect view of the ball. My partner shouldn’t say anything unless she is absolutely certain. Again, if she calls it out and I call it in, it’s a point for the opposing team.

This is why being careful with line calls on the court is so important. Whoever has the best vantage point on the call should be making those decisions.

I hope that this article has helped you to understand line calls a bit better. I know that it can be a frustrating experience dealing with line calls sometimes, but always remember that sportsmanship and integrity are integral parts of our community. Do the right thing and we’ll all be better off in the long run.

If you have any questions, please let me know in the comments below!