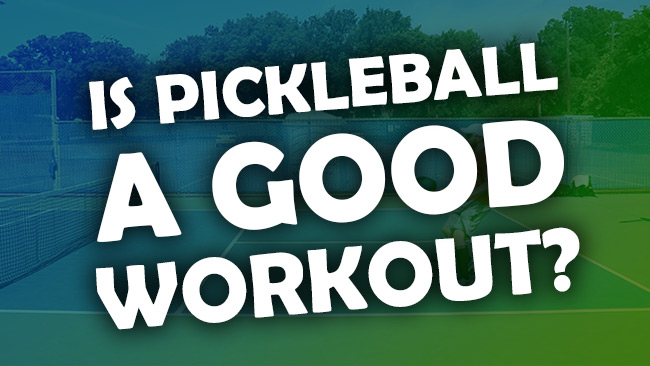 As pickleball explodes in growth all around the world, many people are wondering whether the sport can offer them a good workout. After 3 years of playing pickleball competitively, I’ve seen both ends of the pickleball fitness spectrum. I was skeptical about pickleball being a decent workout when I first started. However, as time went on, I began to understand that pickleball can indeed be a great workout.

There are two levels of workouts that you’ll get from playing pickleball: doubles and singles. In doubles, you’ll get a decent workout that will mainly focus on muscles performing lateral movements. However, singles play offers a significantly greater workout that will get your heartrate up and leave your whole body spent.

I have a lot more to share on the topic so let’s get started!

There are 2 types of pickleball that you can play: doubles and singles. Doubles is, by far, the most popular type to play and it’s not even close.

There are a few downsides though if you’re trying to get a workout from pickleball by playing doubles. As we’ll get into in the singles section, a big part of what makes singles the best workout is the court coverage required. Check out this image:

As you can see, the players are pretty well crammed in there. Court coverage is much easier to come by in doubles pickleball, and thus you won’t find yourself running all over the place to get the ball back.

Having said all that, doubles play can still be a great workout, especially in high level games. But it’s not the kind of workout that you may be imagining.

The main aspect that separates doubles and singles play are the length of the rallies. Rallies last significantly longer in doubles compared to singles. And because of that, your workout, although less intensive, will last for longer.

You can think of doubles play as a jog and singles play as a sprint. You won’t get as much high intensity cardio work in as you would in singles.

The main muscles that you’ll use in doubles play are your guads and glutes. Pickleball is all about the legs and doubles is no different.

This image was taken from a video I created recently. You’ll see this kind of motion a lot in doubles play. You’ll sometimes have to do this 5-6 times in just one rally! You’ll get an incredible workout just from doing this.

The main muscle groups that you’ll exercise in doubles are your quads and glutes, but that doesn’t exclude other general muscle groups in the legs and core. In terms of movements, doubles play primarily consists of squats and lunges.

After a day of competitive tournament play, my muscles are completely toast to where I can hardly walk down the stairs the next day.

Now we’re getting into the serious stuff. This is where things get crazy.

In fact, a lot of people look at singles as an exercise program and not necessarily pickleball. It obviously is pickleball and is played at a high level, but it takes every ounce of your body to play.

Singles play is so tough because you now have to cover the entire court by yourself without the court shrinking down like in tennis. You no longer have a partner to rely on as well. All of this while also dealing with a perforated ball that bounces low to the ground.

Needless to say, singles is a tough game to play and most pickleball players avoid it. Personally, I love singles because of the fitness benefits.

In terms of a workout, the greatest benefit of singles play is cardiovascular. You’ll also get a great workout in the legs, but cardio takes the cake.

The thing that makes singles tough from a technical perspective is that the demand of court coverage makes the player rush. This rushing will cause you to stop and sprint all over the court. It’s taxing, to say the least.

A typical singles session, assuming you’ve got some endurance, can last for 7-8 games which can take 2 to 3 hours. After that, you’ll be pretty much spent depending on your stamina.

However, if you’re coming into the sport with very little endurance, you may not make it to the 3rd game. I know that you’ve probably heard of pickleball being an easy game, but as I’ll talk about below, it’s not.

If you’re the kind of person that doesn’t like either of these options, I have great news for you. We like to do many different types of drills in the pickleball world and one of them is what we call skinny singles. This is a version of singles that is only played on one side of the court.

The great thing about playing skinny singles is that you don’t have to cover the whole court like you would in regular singles, but you still get to hit the ball more than you would in doubles play. Typically, pickleball players use skinny singles to drill or to warm up before a tournament, but you can easily use it as a great workout as well.

Another great feature of skinny singles is that it can be played cross-court or just down the line as you see above. You can tailor the game as you see fit.

Does your partner want more of a workout than you do? Why not play full court and you can just play only one side? You can do what you want considering how flexible it is.

The one myth you have to be careful of

Pickleball is still in it’s growth years. Considering this, it’s easy for myths and misconceptions to circulate, especially on the internet! But one of the worst myths that comes around is that pickleball is an easy sport and is not hard on your body. This is completely false, however, I understand where this comes from.

Here’s what you need to understand about pickleball: it can be as intensive as you want it to be.

When a beginner plays pickleball for the first time, the player will typically hit the ball casually and just have fun. There’s nothing wrong with that.

The trouble comes when the player wishes to amp things up. The injuries come when complete beginners start playing seriously without knowing anything about the sport and have the wrong kind of footwear.

For the casual beginner, yes, pickleball is easy going and can be injury-free. But for people like me who play competitively, injuries are commonplace and can happen in an instant.

As a content creator, it’s my job to warn people about these myths. If you’re going out to play pickleball for the first time, please take your footwear seriously. If you can, wear a pair of tennis shoes or court shoes of some kind. Do not wear any kind of non closed-in shoe. You will fall and it will hurt. I’ve seen people fall dozens and dozens of times and it’s not pretty.

That wraps it up!

I hope this article helped you to potentially find some new exercise in your life. Pickleball is definitely a great option for exercise and it’s one of the most fun activities out there. If you need more help on how to get started in pickleball, you’ve come to the right place. Head on over to my ‘start here’ page to get started.