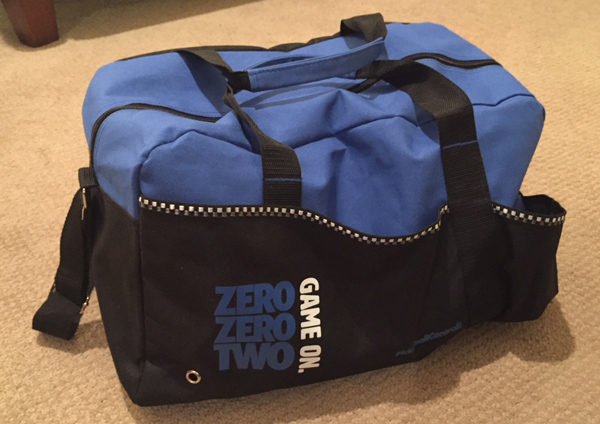 Pickleball bags are a great way to keep your pickleball obsession in order. If you’re not already at that point, you will soon notice that you bring way more stuff to the pickleball courts than what you can carry by yourself. Sooner or later, a pickleball bag will be in your future. But you’re probably saying to yourself; there’s so many to choose! Well, that’s what I’m here for.

In this article, I’m going to give you all the possible options for carrying your pickleball equipment around. There are some cool pickleball bags out there, but I want to start with the basics. I’ll start with the bare-bones options then make my way up to the best of the best.

If you’re looking for a quick answer, the best option for you is based on the amount of stuff you have. If you carry around a lot of gear, water bottles, shoes and so on then, you’ll want to get an actual pickleball backpack. But if you don’t, then a sling bag or regular backpack will work fine.

The benefits of using a pickleball bag

Like I said earlier, if you’re starting to take pickleball more seriously, then you’ll eventually want to own a pickleball bag at some point. You can accrue some hearty benefits by using a pickleball bag. Let’s look at some.

Here’s a picture of me using the absolute most bare-bones option. 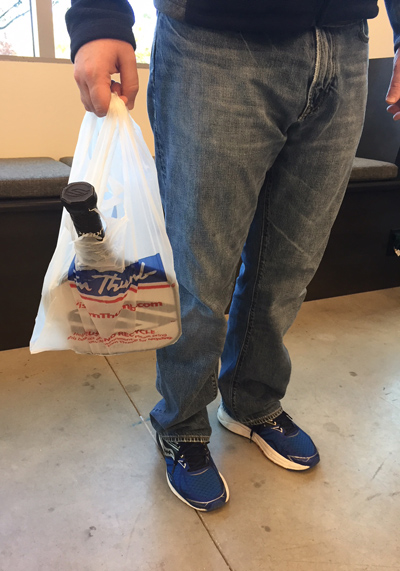 And yes, it’s hilarious and horrible, but it works. If you don’t want to spend any money on pickleball bags then using an old grocery sack can work. You can also fit a few balls in there along with an apple or two, but that’s about it.

There are plenty of obvious reasons why using a grocery sack is a bad idea. Some people don’t like it because it’s tacky and ugly. Personally, I’m all about utility and practicality, but I understand that plenty of people aren’t.

But the biggest problem with using grocery sacks is that they flatten out when you put them down which means things will fall out quickly. They just aren’t secure. You could put your grocery sack filled with stuff down on a bench, then the next thing you know your apples and pickleballs are seemingly racing each other to the other side of the court.

Again, if you need the absolute bare bones option, then this can work for now, but I don’t recommend it.

Sling bags are another type of bag that you commonly see in pickleball. Sling bags are small backpacks that only have one strap. They sling over one shoulder and rest gently on your back. 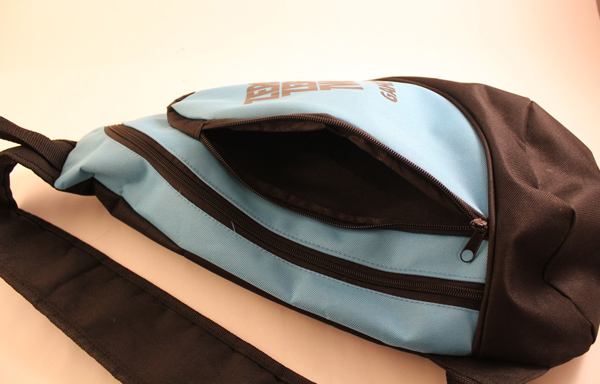 Sling bags are great for people who only take a few paddles and water bottle to the courts. The one that I’ve used is the Pickleball Central Game On Sling Bag. I used this when I was a beginner, and it suited my needs perfectly. The design of this bag is straightforward. It has one main compartment for the paddles, and one smaller one for personal items like your phone and keys.

The great thing about this bag, in particular, is that it’s very lightweight. It’s not like carrying a computer bag or other types of shoulder bags that weigh down one side of your body. It doesn’t do this at all.

This was my bag of choice until my love for pickleball turned into a full-blown obsession. I started buying more paddles and needed more room. I also started carrying more grip tape and other accessories. If you think your game will get to that point, then it’s time to move on to something bigger.

Before we get into the bags that you could buy, let’s talk about some bags that you probably already have. Got a regular backpack laying around that you’re not using? Why not convert it into a pickleball bag? 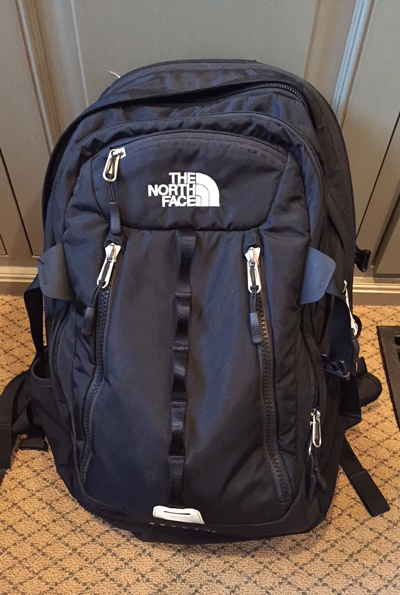 This is the backpack that I used in college. These days I use it to lug my podcast equipment around, but it would work great for pickleball.

The problem with backpacks is that they’re designed to hold binders and textbooks, not pickleball paddles. They’re also definitely not designed to hold shoes. There’s nothing more awkward than trying to pull out a pair of shoes deep inside a backpack.

But this option can work for some people if you have a decent backpack and don’t want to spend the money on a pickleball bag. Regarding which bags to use, The North Face has some of the nicest bags out there, but any bag should do.

Using an actual pickleball duffle bag is a terrific option and is what I use at the time of this writing (Fall 2017).

Here are some benefits you receive by using a pickleball duffle bag:

The bag that I’m using at the moment is the Pickleball Central pickleball duffle bag. It’s great for me because I carry around 7-8 paddles that I let other players try. I also carry a water bottle and a bunch of accessories like grip tape and so on. 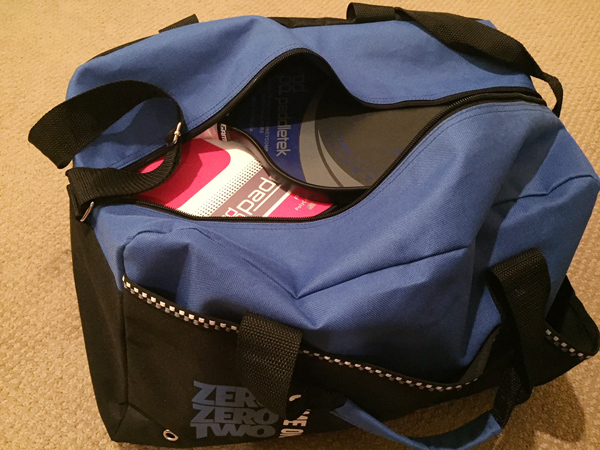 This bag fits my needs in every way. The only problem with it is that the shoulder strap isn’t that great. It’s thin, a bit flimsy and doesn’t work very well as a shoulder strap. But the carrying handles for the bag do work great.

OK, now we’re getting serious. If you want the absolute greatest option available to you then going for a pickleball backpack is the way to go. In my view, there’s no better option than this. I have never owned a pickleball backpack, but I’ve seen them before. They are a great tool for people who bring a lot of stuff to them to the court.

Pickleball backpacks are bags that are specifically designed for the sport we love. These bags are a true fanatic’s bag. They look like small water jugs that open up at the top. Once you do unzip the top, you can see all the way inside where multiple paddles, shoes and water bottles can stay.

If there are any downsides to these types of bags, it would be that duffle bags are typically able to hold more paddles than a pickleball backpack. But for most people, that’s a minor issue.

Amazin’ Aces is a company that makes basic pickleball products. For example, their Amazin’ Aces paddles provide a great option for players who are just starting out. However, they have also made a pickleball bag that’s top notch. The Amazin’ Aces Pickleball Backpack is great for pickleball enthusiasts who need plenty of carrying capacity.

Out of all the pickleball backpacks that I’ll talk about today, this one is probably the most unique. This bag features a main compartment for paddles as usual, but it also has multiple pockets on the side. One of these pockets is a mesh compartment that holds up to 4 pickleballs. It could also potentially double as a water bottle holder.

If you come from tennis, you will feel right at home with this bag. This unique pickleball bag is similar to a duffle bag but comes with backpack straps. This turns it into a traditional tennis bag, but for pickleball! This type of design gives you tons of flexibility on how you want to carry it.

It has a central compartment in the middle as usual where your shoes and paddle will go. But it also has some zippers on the side where more stuff can go. As you’d expect there are multiple pockets on the side to hold personal items. Head has a long history of producing quality gear for tennis players and they certainly don’t skimp out on this one!

Onix makes some pretty decent paddles, but did you know that they also make great pickleball bags as well? I personally own this backpack and believe me, it has a huge main compartment. I can comfortably fit 8-10 paddles in there. Also, a pair of shoes and a water bottle could fit in there as well. You may have to take a few paddles out, but it’s doable.

The Onix Pickleball Backpack also gives you four pockets, two on each side. Phones, keys, grip tape, and other miscellaneous items go here. The wonderful thing about the pockets is that they are separated from the main compartment, so you don’t have to worry about the paddles smashing up against your phone or anything like that.

I hope that this article has assisted you in understanding a bit more about pickleball bags. As I said, you could just use a plastic grocery sack, but if you want to show off your pickleball prowess, getting an actual bag is definitely for you. Thank you for reading and let me know what you think in the comments.