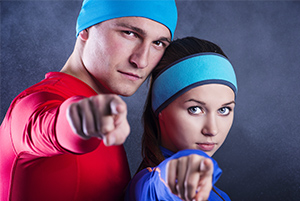 But with all of those strengths, there are a few weaknesses. The big question in the air is: “how do you beat those guys?!” Well, as a young person myself, I’m going to let you in on a few secrets of the young pickleball world. Here are 7 tips on how to play against young pickleball players.

Let them make the mistakes, not you

Letting your opponent make the mistake is a common theme that you hear about a lot in pickleball, but it applies especially to younger people. The reason is because oftentimes they not only want to win but they want to win in style. As a young guy myself, I can testify to this. A big part of my enjoyment with pickleball is that I’m able to attempt crazy or impossible shots more often than in other sports. It’s fun and exciting, but it obviously has it’s risks.

This obviously doesn’t apply to every young player, but there are plenty who love attempting low-percentage shots.  A low-percentage shot is a difficult shot that has a low chance of succeeding. One example you see often is someone trying to play a power shot at the kitchen. It just goes into the net, when they could have just gotten it over with less power.

There’s one keyword to keep in mind here: persistence. The whole point of this strategy is to focus on getting the ball over the net so that they will attempt a low-percentage. It’s important to have solid dink skills for this. If you know you’re going up against some young people, then try to practice your dink more than anything. The lower and softer you can get the ball over the net, the better.

Make them work for it

Every now and then I will play at a Rec center here in Dallas. I’ve made friends with some of the older men there who really like playing with me. I think the reason is because they know that I will go for every single ball they hit to me.

But most of the times, it’s not hit to me, but behind me.

Over time, they have learned that lobbing the ball into backcourt is a useful strategy against me. Why? Because I’ll run for it and attempt to make a great shot. They eat it up every time. However, they also eat up the games because I tend to fail these shots.

But there’s something else going on here that I didn’t realize at first. They weren’t just trying to make me mess up the shot, they were wearing me out as well! Whenever I play against them, I find myself running all over the court going for everything they send my way. Eventually I’m so worn out that I can no longer go for the ball and they end up winning.

Young people want to use up all that energy the have stored up. Oblige their desire by wearing them out slowly until you win.

For the love of all things good and right in this world, don’t pop up the ball for them. They will smash it, and you will be sad.

Trust me on this one. The people I play with know better than to pop a ball up into my smash zone. Sometimes they just give up before I even hit it. A young person’s smash zone is one of the most devastating parts of their game, and will be used whenever they get the chance.

If you’ve been playing pickleball for awhile then you’ve probably heard this advice already. However, it applies to young players even moreso because of the raw power they have. This doesn’t mean that they’ll always smash it successfully. Sometimes it will go into the net, but there’s no need to risk it.

I’ll be talking more about this later, but to not pop the ball up, you have to let the paddle do the work. People tend to hit shots too hard, which is why you see those popups all the time. When you you’re about to hit the ball, remember that the paddle is doing most of the work, and sometimes you don’t need to add any extra force to the ball.

Easier said than done, I know.

The next time you and a friend are hitting back and forth, try to just block the shot instead of swinging at it. Notice how far the ball goes without doing anything. That concept and tactile feedback will help you to reduce pop ups.

Play to a weak partner

One of the best ways to beat a young player is to not play to them at all. I know that this isn’t the most fun way to play pickleball, but if you’re in a competitive setting or at a tournament, this is definitely the way you should play. They can’t smash anything if you’re not hitting to them, right?

I have to give you a warning though. If you’re not playing in a competitive setting, I wouldn’t use this strategy. It’s kind of like being walked in baseball. Although it’s a gesture of respect to the person, it’s definitely not very fun for them. Pickleball players are there to play and not to rest. But if you really want to win, then this is easily one of the best strategies to use.

Serve them a high lob shot

Oh, high lob shots. How tempting you are.

I know this one from personal experience. Every time someone serves a high lob to me, my first thought going through my head is one of power. I want to smash that ball to smithereens. Unfortunately, half the time it goes into the net. But I just can’t help myself!

I have learned to step back from this approach, but sometimes it still gets me. If you’re serving to a young, strong pickleball player, try lobbing a serve to them. It can throw them off, but it can also tempt them to hitting it as hard as they can. This increases the likelihood of it going out, but also going into the net.

Recently, I have realized that using a power shot as a return serve is a bad idea. What I mean by power shot is a tennis-like shot from the baseline that has power and topspin on it. The reason why is because experienced players will simply block the shot into the kitchen. Since power shots tend to accelerate the pace of the game, can’t get to the kitchen in time to make the play. Assuming they do get there in time, it’s likely that they will hit it into the net or hit it up for them to smash. For this reason, it’s important to play return serves slower.

But what if you’re facing a young guy who is hitting super powerful return serves at you? Although they are relatively low percentage, they can be devastating if done correctly.

Here is the biggest takeaway in terms of blocking power shots.

Don’t swing at the ball!

The higher the velocity the ball has when hitting your paddle, the faster the ball will pop off towards the other side of the net. In the vast majority of cases, hard power shots made by the opponent don’t need any extra power on your part to get it over the net. Simply sticking your paddle out and letting it do the work should be enough. Let the paddle do the work.

Learning this technique can be difficult and will take some time. But the more you do it, the more you will learn how your paddle will affect these types of shots. Eventually, you’ll be able to block a third drop shot right into the kitchen. Also, if you can aim this shot to land in their side of the court, that’s even better!

All this talk about power shots leads perfectly into my next point. In terms of blocking shots, some paddles will be able to do it better than others. It all depends on the core and surface of the paddle. I’ll have a full article and podcast produced about this subject alone, but for now I’ll give you a quick rundown.

Pickleball paddles are complicated. But in general, getting to know your paddle on a borderline personal level is extremely important. Do you know what your paddle is made out of? Do you know how the surface is affecting your shots? Don’t worry if you don’t know! But definitely have a look on the internet for your paddle. If it’s a nomex core paddle or has a graphite face, the ball will pop off the face quicker. This means that without you trying to, the ball will travel further.

However, if you’re using an aluminum core paddle, the material should make the ball pop off slower, giving you more control and finesse when a shot is coming your way.

So have a look at your paddle and learn how it functions. That knowledge can go a long way when some young whippersnappers are hitting power shots at you every chance they can get.

So those are some tips on how to play again young people. Take it from me, a 31 year old at the time of this writing. These are things that I see all the time on the court, but I’ve also seen them in myself as well.

Head on over to our Facebook group and let me know what you think about these tips!