There are many pickleballs to choose from out there, but which ones are the best? I’ve tried almost every single pickleball that exists and I’ve narrowed it down to two different recommendations. One for outdoor play and one for indoor play.

What to look for when buying pickleballs

That’s it! Technically, you can use outdoor balls for indoor if you want to, but you won’t get that awesome soft feeling when striking the ball. But if you’re going to be playing primarily outdoors then you’ll definitely want to buy outdoor balls. This is especially the case if you’re playing in a windy area.

When it comes to pickleball color, make your choice based on the lighting of the venue and the surrounding colors. Typically, pickleball comes in yellow, neon, orange or white colors. Most people choose the brightest neon color. Think about color contrast. 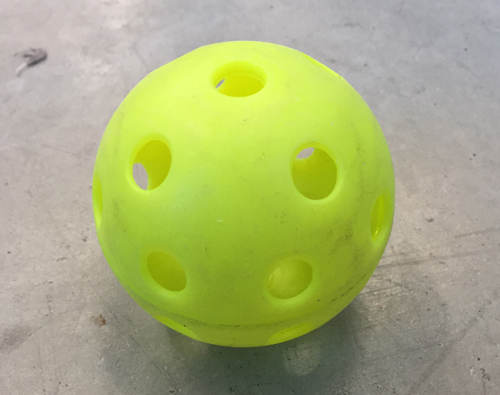 The best indoor pickleball that I recommend is the Jugs indoor pickleball. I’ve played with these balls hundreds if not thousands of times and they are the best to use for indoor play. Jugs makes great products, and this pickleball is no different. You can also buy them by the bucket which is great for people looking to stock their pickleball venues. These balls only come in neon green or white.

One important aspect to remember about these balls is that they will eventually lose their bounce, but it will take multiple months of consistent play for this to happen. This is the nature of pickleballs and there’s not much you can do about it. Also, you can easily tell when a pickleball has lost its strength. The ball will be smooth to touch instead of rough. It also won’t bounce as high and you can easily tell the difference when using them. Be careful though, if you go from using a heavily used Jugs pickleball to a new one, the ball will fly and bounce much further!

Jugs pickleballs are the best option when it comes to indoor play or if you’re just casually dinking up against your garage door or something similar.Runner-up 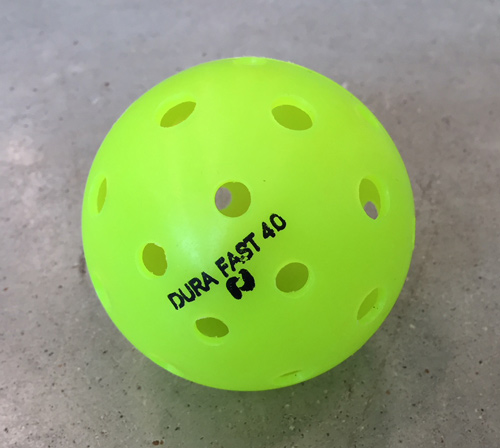 The Dura Fast 40 pickleball is the most time-tested and consistent pickleball in the sport today. It has been the official ball multiple times at the US Open, at Nationals, and is consistently used in tournaments all around the country. Considering that it’s so standard, most competitive players choose to play with only this ball even though it’s very hard and heavy. They don’t care that the ball doesn’t feel soft because this is the ball that most outdoor tournaments are going to use. Thus, playing with any other ball would be a mistake. If you’re looking to be competitive in pickleball, you should be practicing with this ball. But if you’re not, then using any kind of ball you want.

Another reason why this outdoor pickleball is so popular is that it bounces lower than most balls out there. This is a huge concern that 5.0 players have. Some other balls bounce too high, which makes it easier to drive the ball back over. This takes the finesse game out of the equation. The Dura Fast 40 is also quite heavy for a pickleball. This makes it a great ball for windy conditions.

Having said that, it’s not the most comfortable ball to play with. It’s very hard and doesn’t feel soft coming off the paddle. Also, like most outdoor balls, the Dura Fast 40 tends to warp or “egg” with use. Cracks in the ball are also quite common. But, that is the nature of outdoor balls and it’s something that people just have to deal with. Like I said earlier, the reason why you’re getting this ball is that you’re interested in playing competitive outdoor pickleball. 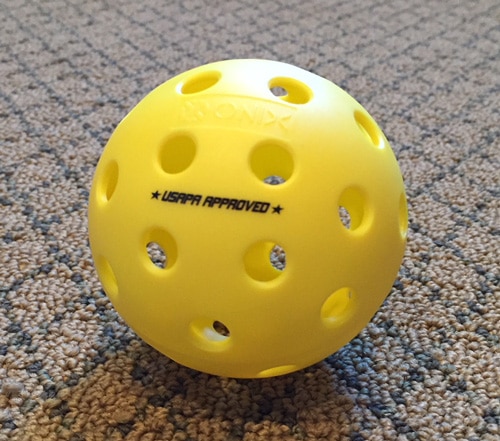 This ball is now USAPA approved without conditioning.

Update: As of April 2018, the only outdoor ball that I recommend is the Onix Fuse. The reason is that it’s the softest outdoor ball available while also being USAPA approved. However, most outdoor tournaments will not play with this ball. So if you’re looking to play competitively, then you should stick with the Dura Fast 40.

Similar to the old Pure 2, the Fuse has a soft feel when striking it. But unlike the Pure 2, the Fuse doesn’t bounce as high. This is really important if you want to play competitive pickleball. The higher the ball bounces on the court, the easier it is to drive the ball over.

If you want to buy the previous version, the Onix Pure 2, the link is here.

My initial review of Onix balls remains the same:

The problem is that outdoor balls need to have smaller holes in order to be wind-resistant. But with smaller holes comes a harder ball since there is more material. They also have to be thicker in order to be more durable. Most outdoor balls are so hard that it feels like you’re hitting a rock. Onix has fixed this issue by making a ball that is designed for outdoor play but still feels relatively soft when you hit it. You won’t get the kind of softness that you would get with indoor balls, but it’s the best you’ll get at this point. For now, the Onix Fuse comes in yellow only.

Keep in mind that as with most outdoor balls, they tend to crack easier than indoor balls.