You’re probably here because you were searching around the internet, or you were linked to this page by a friend. In any case, welcome! I’m excited that you’ve taken an interest in pickleball. I’m obsessed with it, as most pickleball players I know are. Believe me, it’s insanely fun.

But sometimes starting out on something new can be a bit daunting. That’s why I’ve made this page. I’m going to give you the very basics of how the game works so that you can decide if you want to take it a step further.

Yeah, that’s most people’s reaction when they hear about the sport for the first time. According to the USAPA website, the origin of the name is contested with ‘Pickles’, the inventor’s dog, being one possibility. What we do know for sure is that the sport was invented in 1965 by Congressman Bill Pritchard and his friend Bill Bell.

Looking for something to do on one Saturday afternoon, the two men improvised a badminton game on their court by using ping pong paddles and a perforated ball.

The game grew from there, but it wasn’t until 5 years ago that pickleball saw tremendous growth. Now here you are, reading about it for the first time!

In case you’ve never seen or heard of pickleball before, let me just give you a very basic rundown on what the sport looks like. Just imagine a miniature version of tennis with huge ping pong paddles. Got that image in your head? Good. Now let’s take a look at what a pickleball court looks like. 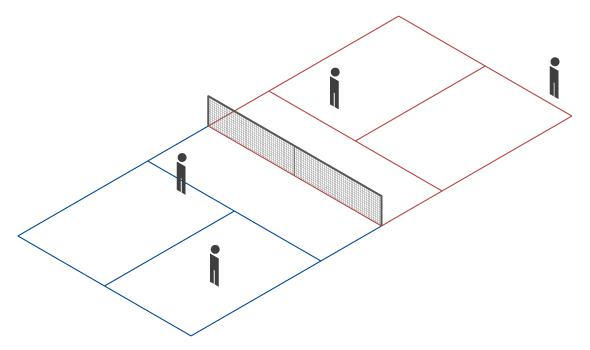 A pickleball court is 20’ x 44’ which is the same size of a badminton court and basically half the size of a tennis court. It has a net in the middle similar to tennis that is about 3’ tall.

Pickleball is a racket sport typically played with 4 players (2 on each team), but it can be played with just 2 if you want the workout of a lifetime.

The object of the game, again similar to tennis, is to hit the ball over the net in a way that makes the opponent make a mistake. If the opposing team lets the ball bounce twice on their side, hits the ball out of bounds on your side, or makes a fault of any kind according to the rules, then they will either lose the point, or the serve. The first team to 11, or any other number agreed on, will win the match. However, you must win by two points. Don’t worry, I’ll explain all this later. But first, let’s take a basic look at some of the equipment used in pickleball.

Tools of the trade

If you come from either tennis or table tennis you will glide easily into pickleball. Even if you don’t, it won’t be a problem. I’ve made this website to get you started.

Let’s start with what makes pickleball unique: the paddle! 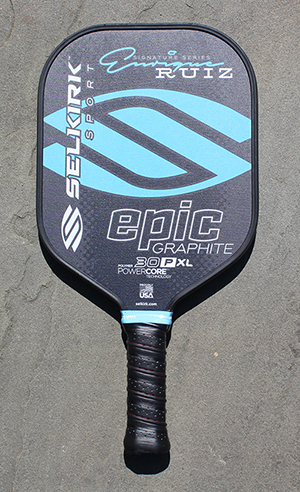 There’s no mistaking the sound a pickleball paddle makes. You can hear it from hundreds of yards away, and it has the occasional effect of getting people into the game.

As you can see from the image above, pickleball paddles are just fancy, oversized table tennis paddles. This one is particular is made by Selkirk, one of many paddle manufacturers.

Although some people still use wooden paddles, most use composite paddles that are made from different types of core and surface materials. Some core materials you will see include nomex, aluminum and polymer. Polymer is the most popular type of core because it offers the most control of the ball and is the quietest.

The surface can be coated with either a composite material, fiberglass, or graphite. Personally, I like graphite because it makes the ball “pop” off the surface.

As you discover pickleball more, you’ll be able to find which type of paddle works best for you.

There are no furry things in pickleball and this same rule applies to balls too! Unlike tennis balls, pickleballs are hard, but have holes in them in order to make the ball easier to control.

Believe it or not, there are two types of pickleballs. One that’s used for indoors and one for outdoors. An outdoor ball has smaller holes in order to not be affected by the wind and is also slightly harder. However, these balls easily crack and will need replacement often. The one shown below is an indoor ball. 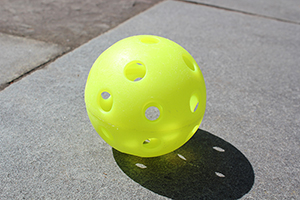 Racking up the points

Since pickleball is typically played in doubles, I’ll give a brief rundown on how the game is scored from a doubles perspective.

Each match is typically scored to 11, but can sometimes be changed depending on the situation. If you have a lot of people waiting to play, sometimes matches will be played to 9. In other scenarios like tournaments, matches can actually go to 15.

Regardless of how many points you go to, you always have to win by 2. This means that if the score has reached 11-10, the team with 11 has to go to 12 in order to win. The scores will keep increasing until one team wins by 2.

One important aspect to keep in mind is that you have to be the serving team in order to gain a point. That leads directly into our next topic which is serving.

In doubles pickleball, each team gets to serve twice. The serve is the first shot that gets the game going. The person on the right side always serves first, just to make it easy! Before the point begins, the server will announce the score (with their score coming first), then they will announce which server they are. You will either be the first or the second server on your side.

The flow of the game

Don’t worry if some of this seems strange or just downright confusing. My goal here is to just give you a general guide on how the game flows. It will make much morse sense once you get out there on the court and experience it yourself.

But you’re probably wondering, what does playing the sport actually feel like?

Good question. It’s unlike any other sport out there, and I’ve played quite a few.

Pickleball offers a beautiful balance between slow play, fast play, power and finesse. It’s an incredible thing to watch. At one moment, you could be hitting the ball hard from back court, then the next moment you’re softly hitting them just barely over the net. At other times, there could be multiple fast-paced vollies going back and forth truly testing your reaction times. It’s great, because you never know what you’re going to get. It’s like a box of choco – nevermind.

As I’ve explained in another article, you don’t have to be an amazing athlete in order to play. This isn’t medical advice, but if you’re overweight or have other issues surrounding physical stability, you can still play the game! It’s great exercise, and it really gets your body moving!

Thinking about playing? Awesome! Just go out and do it or try to find someone that can help introduce you to the game. You can also check out a recent article that I wrote about finding a pickleball games.

Have fun out there!