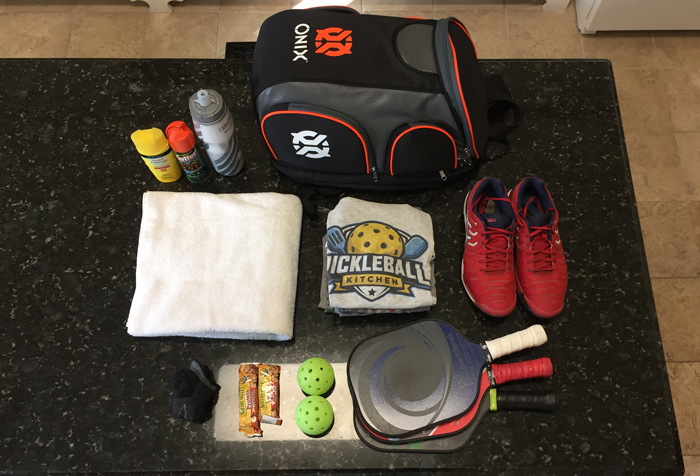 Have you been bitten by the pickleball tournament bug? I know the feeling. Once you feel the adrenaline and the rush of playing competitively, it can be hard to resist playing in more tournaments. It’s also hard to resist that desire to win gold. If you’re wondering how you can best prepare yourself for success, then you’ve come to the right place.

Even if you’re playing in a tournament for fun, preparing yourself properly is going to give you the best experience possible. I’m not only going to talk about how to prepare for a tournament physically, but mentally as well. Let’s get started!

Make sure you pick the right partner

My co-host, Jana, and I often talk about the social aspects of pickleball on our podcast. One of the unique talking points we’ve covered is how to play with certain kinds of partners and what you should look out for. It’s important to play with people that are similar to you.

But in competitive play, this is amplified even more.

Finding the right kind of partner for a pickleball tournament, especially a large, sanctioned event, is going to make your life much easier.

Here’s what you need to know: find someone who’s going to share the same goals and expectations as you.

You know this already, but finding someone with a similar skill rating is a good place to start. This puts you and your partner on a relatively even playing field in terms of skill.

But what’s really important are the goals and expectations. Ask yourself, what do you want to get out of playing pickleball tournaments? Why are you playing in them?

What your answer is will dictate what kind of player you find as your partner.

If your goal is to just have some fun and enjoy your games and watching the others, then find someone who is going to share that mindset. But if your goal is to win, win and win some more, well, you get the idea.

If you’ve never played in a pickleball tournament before, let me be the first to tell you that it is completely different than regular pickleball. Open play or rec pickleball is fun, social and relaxed. Tournament pickleball, on the other hand, is significantly more serious.

I’m not saying that tournament pickleball can’t be fun and enjoyable. That’s certainly not the case. But playing in your first tournament is going to feel very different and it’s something that you probably won’t be used to.

This is why practicing in the same conditions as the tournament will give you an extra boost of confidence before you go in. It also helps to reduce tournament nerves, something that most people deal with.

Here are the three general rules you should follow the week of the tournament if you can:

Out of these three, playing in the environmental setting is probably the most important. This is especially true if you’ve never played in either location. For example, if you only play indoors, but you’re playing in an outdoor tournament in a week, you’re probably going to have a rough time at the tournament.

Make sure you get used to the setting in which you’re going to be playing, even if you play a mix of both. 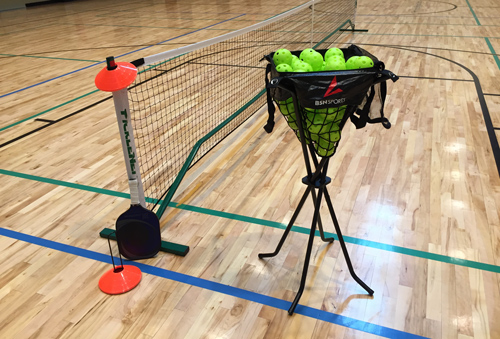 If the tournament is indoors, then play indoors only!

Most tournament directors will have the ball selected many months before the tournament starts. It’s wise to play with the selected ball so that you get used to all of the variables that the ball introduces to the game.

As you’re practicing with the different environments and pickleballs, make sure you include your partner. There’s nothing better than getting positive court chemistry going before the tournament. Discuss anything that needs to be hammered out before game day.

Are you going to stack? How far over should the forehand player take the shots in the middle? Who is going to serve first? The more of these questions you answer, the better you’ll be able to hit the ground running once the big day comes around.

Pack everything the night before

Okay, let’s get into the actual tournament preparation. I highly suggest that you pack everything that you need the night before the tournament. I didn’t do this for my first tournament, but I really should have. In my rush to get out the door, I forgot multiple items that I wish I would have brought.

Not only that but getting everything ready the night before will help to reduce tournament nerves. Just from my conversations with people, I can confidently say that the vast majority of players get tournament nerves.

Getting everything ready the night before is going to help you reduce the nerves and will help you to sleep better.

In terms of what to pack, here are some ideas:

If you’ve never played in a pickleball tournament before, then you may be surprised to know that you will work twice as hard on the courts as you do in open or rec play. It’s brutal.

With all of that work comes a whole lot of sweat. Packing extra shirts (I typically bring 3-4), is essential. You don’t want to walk into a gold medal match while you’re literally dripping.

You could also consider packing extra socks and a pair of sandals. Wearing sandals can help to cool your feet off after every match to help reduce hot spots or even worse, blistering.

If you’re not already the kind of player that brings a towel with them to pickleball, I highly encourage it. It not only keeps you from sweating into your eyes but more importantly it keeps all the sweat off your paddle handle.

And remember, as I said earlier, you will sweat a ton during your first few matches of the tournament. It will be much more than what you’re used to, so be prepared!

If you have an extra paddle laying around, throw it in your bag. You never know what will happen when you’re at a tournament. You could be warming up with your partner, then all the sudden your paddle face and the ball are both going over the net together.

This happened to me once before a golf tournament when I was 13. I was warming up my driver when I felt this horribly strange sensation in my hands. I look up at the ball as I usually do and there I see my driver’s head and the ball flying together like an odd couple. It was horrifying.

Don’t let something like that happen to you. Bring an extra paddle just in case!

As I said earlier, you will play a lot harder in a tournament setting than you would in a rec play pickleball setting. Considering that, you have to fuel your body in a way that will give you the best chances of success.

I know that eating breakfast is hit or miss for a lot of people. But having something in your belly before you start playing is going to guarantee that you will make it to lunch without your stomach screaming at you.

Even if it’s just a granola bar or something, it’s better than nothing at all.

When it comes to eating food later in the day, remember that the tournament committee may be providing lunch to players. In fact, they may even give you breakfast. Just make sure you know the details so that you don’t start a match with an empty stomach.

Food isn’t nearly serious as drinking fluids though. Getting enough water is essential to keep your body going, especially if you’re playing outdoors during the spring or summer.

How to deal with tournament nerves 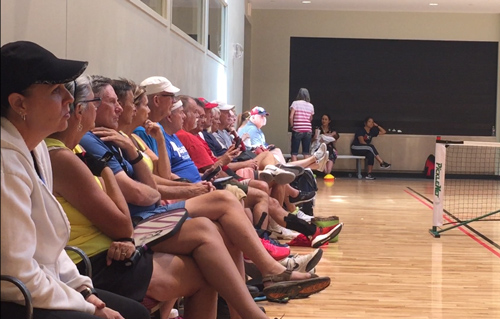 Get used to people watching you at tournaments!

Look, I’m not a psychologist, but I know a thing or two about nerves. What we call tournament nerves is just anxiety. Having anxiety is being in a state of “fight or flight” where your brain thinks that there is a threat of some kind.

The trick is finding out what that threat is and convincing the logical side of your brain that the threat is no longer present. Combining that with deep and conscious breathing will help enormously.

First and foremost, you have to have the right expectations. If you and your partner are just there casually to have some fun and do a bit of competing, then your expectations for the tournament should reflect that.

Winning is different than playing

If you’re a “pickleball puritan” like I am and like to play the game as technically sound as possible, then tournaments are going to be a rude awakening for you.

People do not play pickleball tournaments as you see in 5.0 games on YouTube. They play to win, and that’s it. For example, if a team is noticing that their opponents can’t move very well, then they will lob them all day long. Or if a team isn’t getting up to the net very well, they’ll just bang it all day.

Pickleball tournaments are not a place where the best technique wins. It’s a place where weaknesses are brutally exploited regardless of what they are.

This is a huge point that you must understand before going into your first tournament. Until you get into the 4.5 and 5.0 area, you rarely ever see “textbook” or predictable pickleball being played at tournaments.

This article ended on quite a somber tone, but I want to make sure you understand that pickleball tournaments are for fun, fellowship, and fitness! And they are fun! If you’re just starting out in the pickleball tournament world, don’t worry so much about winning. Just take in the experience, learn something new, and make new friends!