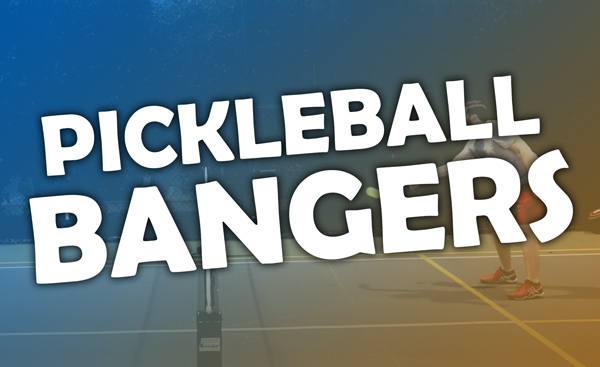 This is all you need to know about bangers! Let’s get started!

Banging is a part of the game of pickleball and it’s here to stay. It will never go away.

Sometimes I don’t like using the word “banger” because it almost sounds derogatory. People who hit the ball hard all the time are just playing the game how they want to and there’s nothing wrong with that.

Believe me, if hitting the ball hard wasn’t effective, no one would be doing it.

But from now on, I want you to promise yourself that you won’t get frustrated with this stuff any longer.

With this information, you’ll have the tools necessary to make the changes that will guide you back towards success.

To start, let’s talk about the basics.

In terms of “quick fixes”, this is the one that you want to pay attention to first. Whenever someone comes to me with issues about bangers, I’ll ask them where the ball is being hit in relation to their body. Most of them say around shoulder-height or at their face. I guarantee you that 95% of those balls are going out.

If you know that you’re going up against a banger, stop hitting those high balls! They are most likely going out, and you’re falling into their trap by trying to hit them. As an experiment, just try letting some balls fly past you and see what happens. I think you’ll be pleasantly surprised!

However, there are exceptions to this. Let me explain.

Topspin plays a huge role in pickleball, but especially with hard shots that are hit at you. Deciding to let a ball fly past you to go out, especially at the kitchen line, is going to be predicated on whether or not the ball has topspin.

Basically, the less topspin the ball has, the more likely it will go out. The reason is that because the ball is spinning towards you, it’s moving the ball downward quicker than if it didn’t have topspin. This is what makes letting balls go out a delicate dance.

We’ve all heard the ‘shoulder high; let it fly’ saying, but a very hard ball hit towards your waist with no topspin will still probably go out! Topspin is the key!

But how do you know if it has topspin or not?

How to know if there’s topspin

The first thing is to watch the ball. If you can see the holes while it’s flying at you, then it has no topspin. However, if the ball looks like one solid color, then that means you can’t see the holes because the ball is spinning so quickly. That most likely means topspin.

The other way to know is player knowledge. Have you been burned by this player before? Have you let one of their shots go out before that ended up diving down at the last moment? Then clearly this player has great topspin. If that’s the case, then you may not be able to let as many of those balls go out.

Another way to know if there’s topspin on the ball is to watch their body language. Were they a tennis player? Do they make big motions with their swing and break their wrist upward? If that’s the case, then there’s most likely going to be a lot of topspin.

Letting balls go out is one of the best and most efficient ways of beating a banger. The more you let those balls go out the baseline, the less likely they are to bang it again at you.

Bangers from the baseline

In terms of difficulty, these are the easiest hard shots to deal with. However, there are some major errors that are critical to understand.

You’re probably wondering, what’s the point of the third shot drive? Believe it or not, the 3rd shot drive isn’t necessarily about winning the point, it’s about setting up the 5th shot. The exception to this would be if there’s an obvious gap in the defense like an open sideline or something like that.

The main objective of the 3rd shot drive is to make the 5th shot drop or drive much easier. Or, in a lot of cases with beginners, to cause a pop up which they can put away. Think about it this way: would you rather have a 5th shot drop or drive that was 22 feet away or 14 feet away? I think you would take the 14 foot shot any day!

This is what the 3rd shot drive accomplishes. Most people have a really hard time blocking third shot drives correctly. So what ends up happening is that they either pop it up for them to smash or block it into mid-court. At mid-court, the banger has the ball exactly where they want it. They run up, bang it even harder and now you’re in worse shape.

How to handle 3rd shot drives

The major tactical error that people make with bangers at the baseline is blocking the shot into mid-court. This is exactly what they want, because now they’re going to run up and kill it, or make a 5th shot drop that’s even easier than before.

This is why you never want to return a 3rd shot drive into mid-court. Here’s a visual to show what I mean.

In general, there are two different tactics that you can try.

The first, and most preferred, tactic is to focus on hitting it back to their feet. You don’t want to necessarily hit it “deep”, just to their feet regardless of how close they are to the net. The reason why this tactic works is that when you hit a ball to their feet, they don’t have time to let it bounce high. And therefore, they can’t hit it hard again.

The second tactic is to block it into the kitchen. There are some major downsides to this that I want to warn you about though. I would only do this if the opponent has limited mobility or if you don’t think they’ll be able to get there in time.

Remember, the point of the third shot is to get to the kitchen in some way. If you’re blocking their drives into the kitchen, then you’re just making it easy for them to get there.

This is why I prefer attempting to hit it back to their feet. That way you’re not risking blocking it into mid-court, or worse, popping it up.

If you’re hitting the ball into mid-court too much, try this handy trick. Instead of blocking the ball straight forward, just block it cross-court instead. Check out this image:

The two red arrows that you see in the image are the exact same length. But notice how one is going much shorter than the other. That’s because of the angle.

So if you’re blocking shots too far back into mid-court, then try going cross-court and it will be much more difficult for them to run up and drive it at you.

Bangers at the net

Okay, let’s get into the hard stuff. I know it’s maddening to get hard balls hit to you, but try to focus on these principles and it will help.

Beating a banger at the net is all about prediction and preparation. You have to see it coming before they even start swinging. Let’s talk about the first point.

Now, as I said earlier, player knowledge plays a huge role in this. As you’d expect, you’re much more likely to get a hard ball from someone that has a history of banging.

Another aspect worth mentioning is that if you’ve made it known to a lot of people that you hate having hard shots hit at you, then people are much more likely to do just that in competitive games or tournaments.

Being aware of not only your opponents play style and history, but also your own reaction to this whole pickleball banger thing is an important element to understand.

The higher, the better

I’m talking about high dinks. If your dinks travel well above the net and bounce up high, a banger is going to take advantage of that. Make sure your dinks are low to the ground so that the opponent is less likely to hit it hard.

Learning how to block powerful shots at the net is absolutely essential. But there’s one thing that I want to get into your mind early on.

Get this into your head! A very common 3.0/3.5 mistake that I see often is that they try to swing at a power shot. This will end in complete disaster 99% of the time. I know, I’ve been there!

A great way to get started in blocking power shots correctly is to calm down. It’s very important to stay calm when you know a drive is coming your way. Try to consciously relax yourself. The more relaxed you are, the better.

If you’re relaxed, the rest of the technique for blocking power shots is very simple. All you want to do is move your paddle in the path of the ball, loosen your grip, and do nothing. You must have the confidence to do absolutely nothing. If the ball is hit hard enough, there will be plenty of force coming off your paddle to get the ball back over softly.

The less you do with a block shot, the better!

The beautiful thing about this technique is that it looks so easy. It’s not, obviously, but that’s the idea you want to get into your opponent’s head. You want them to say to themselves, “Wow, this isn’t going well. All of my power shots are just dribbling back over the net. I better start dinking instead.”

Oftentimes, this will happen. And it’s the most satisfying thing ever!

How to handle pop-ups

If you’re popping up the ball, it most likely has to do with your grip pressure. One trick that I see people do a lot is they’ll remove their pink finger from their grip. That’s a decent fix for now, but it’s not a longterm solution.

Loosening up your grip is going to be your best bet. Try that during rec play and you’ll eventually get used to it. If you want to practice this, be aware of your grip pressure throughout your day.

How hard are you gripping your steering wheel? Your toothbrush? Your curling iron? Always be aware of your grip pressure and you’ll be able to translate that into pickleball.

The magic happens when you’re able to put all of these defensive tools together. When you do, everything flows together beautifully.

That’s all she wrote!

Thanks for stopping by to check out my article. If you’re having trouble with bangers, try out the tips and tactics in this article and you’ll see significant improvement! If you have any questions, feel free to post them below.